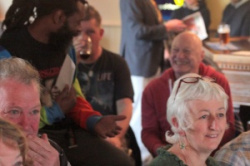 It must be something in the air of Marsden. It’s a funny time of day to hold a poetry open mic – at 11 on a Sunday morning – but it works. The sixth Write Out Loud poetry jam, compered by Write Out Loud’s founder, Julian Jordon, and held as part of Marsden jazz festival, enticed young and older poets to come out and read in public for the first time. Other poetry jam regulars read from published collections. One storyteller told how poetry led to the sack from her job.

It’s been said before, but it bears repeating. The Marsden poetry jam is Write Out Loud’s credo made flesh, that reading your poetry out in public is empowering, and open to all. Thus it was that teenager Becky Steeples from Penistone found herself reading from her sheaf of poems to a pub-full of strangers at The Railway. She enjoyed it so much that she was eager to hear about other reading opportunities afterwards. Another first-timer, Mary Chadwick, read poems that took us to the countryside of the 1950s, and the past, present and future of Remembrance Day.

Barbara Kaye kicked off proceedings with a narrative poem in which she employed the talents of fellow poets Felix Owusu-Kwarteng and Gordon Zola as well. Helen Ashman told how heading dry admin memos with poetry won her plaudits and positive feedback but not the appreciation of her university boss.

Seamus Kelly harked back to the days when it was legal for teachers to use corporal punishment at primary school, while Stephanie Blythe’s poems included the “off the map”, back-to-nature ‘Railway Siding’, now the preserve of fox and cubs, buddleia and kingcups.

Chris Walker, a member of Stockport Write Out Loud, read two moving poems - ‘Akinola’, about her father, and ‘Your Smile’, about her grandson. David Makin, who counts Alan Bennett among his friends, suggested ‘God Save Our Gracious Pig’ as the new Tory conference anthem, and resisted any dying of the light with ‘Not Waning but Waxing’, a poem that spoke of “erotic habits” and went “with the Flo … a real fast girl”. David’s son Dominic later stepped up to the mic to read two excellent poems that he had written only that morning in the pub. Poems of immediacy, you might say. One of them was about a tragedy at Oldham Baths that was duly recorded in the “Oldham Chron”.

Write Out Loud’s gig guide editor, David Andrew, read poems from his brand-new collection, ‘Ventriloquist’s Dummy’ (look out for more details of that soon). David Coldwell read the thoughtful and complex ‘Starlings’  about the Dewsbury aftermath of the 2005 London bombings – a poem that would repay further consideration on the page.

Martin Forster listed all the poems he couldn’t read because the jam was a family occasion, and well, it was a Sunday morning, although he teased us with some of the titles. There were instead poems about his father, and about clearing out his fridge before going on holiday: “My art’s gone cold.”

Diane Green of Kirklees Libraries is a tireless literature organiser in the face of spending cuts, and has supported the poetry jam since its inception and the regular monthly meetings of Marsden Write Out Loud at Marsden library as well. She read a poem by Martin Webster written at and about last year’s poetry jam: “Poetry jam is made from words … copper-bottomed good intentions … you never know what you will get until you lift the lid.”

A staunch Write Out Loud regular, Andy N, read from his A Means to an End collection, put together in collaboration with Write Out Loud Bolton’s compere, Jeff Dawson. There was a striking poem about a former theatre in Stretford, and the contrast between Andy’s own memories – “a ghostly shell of the past”, and those of his father’s – “a high-class place which featured shows by the Halle Orchestra”.

In recognition that this event was part of the Marsden jazz festival, there were poems about jazz by David Greaves and Write Out Loud Stockport regular Martin Elder, tributes to the Beat Poets by Dave Morgan and Paul Blackburn, a Beat pastiche by Gordon Zola, and a poem about rock and roller Chuck Berry from a southerner whose name I’m afraid I didn’t note down.

A poetry jam regular and favourite, Felix Owusu-Kwarteng, provided a fitting climax to the proceedings, with a hilarious poem about fame and those “famous for being formerly famous”, as well as his much-loved ‘Barry the Bacteria’, a special request from Liam, mine host at The Railway.

As usual, Julian Jordon was the perfect compere – unobtrusive, speeding his performers to the mic, and inserting just the odd irresistible pun from time to time. Our jazz festival steward at the poetry jam was writer Jo Stanley, who said she would be back next year - to read some poetry herself.

We managed to take in a bit of jazz over the weekend as well, the pick of which was a Scottish group called Rose Room, a quartet that play invigorating, stomping, exhilarating rhythms, in homage to Django Reinhardt, Stephane Grappelli and the Hot Club de France, although their connections are apparently with the Hot Club of Glasgow.

They were playing under a marquee right next to Julian’s house in Marsden. One of their numbers, delivered in robust style by vocalist and violinist Seonaid Aitken, was the marvellous ‘I Saw Stars’. We certainly saw them at The Railway the following morning.