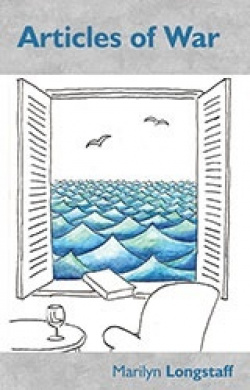 Marilyn Longstaff has published four poetry collections: Puritan Games (2001), Sitting Among the Hoppers (2004) and Raiment (2010). Articles of War, brought out this year by Smokestack Books, is grounded in her Salvation Army upbringing.  It is also grounded in a local and national geography that feels persuasively north-eastern in flavour. Marilyn lives in Darlington and writes from within the Vane Women writing, publishing and publishing collective. There is a warmth and humour to this collection that felt like a door held open to a peopled landscape that was often familiar (I lived in Durham city and later Middlesbrough), yet always surprising.

The book is for her long-time women friends and fellow writers. But its dedication goes beyond a statement, in a poem that begins with “women descending on Whitby from the cliff heights/… with their electric toothbrushes” and ends up in Botham’s family-run bakery. I felt those women’s presence throughout my reading and recognised times I’ve lived through in the skilfully chosen detail through which the poems find their direction - often towards an ending that shifts their content onto a different level entirely. After the dedication poem, for example, Longstaff offers ‘Bournemouth’, set ahead of the rest by a blank following page.  It seems to describe a predictable family seaside holiday, yet its final tercet - “the totalling of fine versus horrid,/balancing it up to see whether or not/we’ve had a good time” - establishes an instant resonance between a familiar childhood experience and mature reflection on a whole life course.  The collection bookends this with ‘Alternative Ending’ and the delightful projection, “Then I found God, he wasn’t lost,/just not quite where I’d left him off.”

God dogs many of the poems here, often to hilarious effect. In ‘Being Snogged by Elvis’, “Joy Hour at the Citadel –/Jesus first …” has to stand in for The Joy of Sex.  An A-level text, DH Lawrence’s Selected Essays, “proved the stumbling block,/which after much prayer, Dad permitted//for examination purposes”, in ‘Blue Books’. The poem ends by noting, “This began the rot./I still have a long way to go”, another telling final line.

I felt that the poems grounded in childhood and later in a teaching career  were among the most successful. Also, the sense of an embodied speaker in a particular landscape was repeatedly well accomplished; for example, in ‘And it stopped there’, a woman completes the journey to a Buddhist stupa in “her flimsy dress, bought from a roadside bazaar,/moulded by sweat to her unsuitable body …” Yet this evocation of uncomfortable bodily awareness does not inhibit striking observations: “…the monks sporting unexpected digital watches/and slip-on shiny black shoes with gold chain detail …” (I loved those shoes!). Similarly, in ‘The Triumph of Evil’, the speaker’s angry words are “imprisoned/by a solid plug of indigestible food”. And in ‘Conversations’, someone visiting her mother after a stroke says: “I sit on a hard seat near to my mother’s head,/breathe in, breath out with her unaccustomed silence”.

There were poems that seemed less persuasively located in place and embodied emotion, such as ‘View from the Delphi Hotel’ and ‘It’s a summer we’ll never reach’. But perhaps it was their contrast with other such gutsy, impactful work elsewhere in the book. What I’ll take away and can imagine sharing are poems such as ‘Naples’ which begins with the speaker’s mother sending her a post-hysterectomy get-well card with two fat babies on it and ends with her best friend soothing her worries about her daughter, inter-railing alone in Naples, with the words “ ‘Who was it who said, ‘See Naples and die’?”.

I won’t tell you more about “the arsey one, hand on her hip, petulant mouth, high breasts” in ‘The Three Graces’.  You’ll have to buy the book and find out.