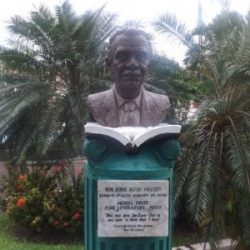 A museum in St Lucia on the site of the boyhood home of the Nobel prize-winning poet and playwright Derek Walcott has closed amid a funding shortfall that has been linked to disputes over  tourism developments on the Caribbean island.

The Guardian reports that Walcott, who died at the age of 87 in March, attended a ceremony last year to mark the opening of the museum, housed in a reconstruction of his former house in St Lucia’s capital Castries. There is a statue of Walcott in the square that was renamed after him in Castries.

The St Lucia National Trust has now closed Walcott Place, citing budget cuts. In a press statement on its website which also details its plan to develop the centre, the trust said the closure was until further notice: "This decision has regrettably been taken due to a number of funding cuts resulting in the trust no longer being able to fund the operations of this memorial space."

The trust is said to have previously expressed concerns over a planned resort scheme that was to be partly funded by the sale of St Lucia citizenship to Asian investors, amid fears that a proposed causeway linking a nature reserve to the mainland would damage the shoreline and threaten endemic rare species. The trust is also objecting to a planned dolphinarium at the Pigeon Island national park in the north of the island. In April, the St Lucia government announced the removal of the trust’s annual subsidy, which amounts to about $250,000, about 20% of its annual budget.

In a poem lamenting the building of luxury hotels on St Lucia called ‘The Acacia Trees’, from his 2010 collection White Egrets, that also refers to PIgeon Island, Walcott says “… the breakers / grin like waiters, like taxi drivers, these new plantations / by the sea; a slavery without chains, with no blood spilt - / just chain-link fences and signs, the new degradations.”