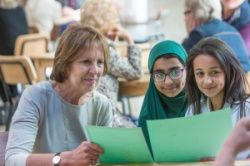 TV, film and stage star Dame Penelope Wilton was at Square Chapel Arts Centre, Halifax to launch and read from a collection of poems written by Halifax schoolchildren who had taken part in the PoetryQuest literacy project.

PoetryQuest is a national initiative by education charity Children & the Arts which pairs up arts venues and schools with professional poets to increase awareness, access and knowledge around poetry and literacy.

The schools have worked with two local poets, Winston Plowes and Keith Hutson over the three years. Both poets have become poet-in-residents, delivering regular workshops and mentoring the children. Winston was even been presented with an embroidered tie and medal by the children, teachers and parents to thank him for his help.

Each year of the project has started with a day for the teachers giving them the skills and strategies to help them teach poetry in class, followed by a performance of poetry by Winston and Keith for the schools. Workshops in the schools have explored different kinds of poems, such as haiku, kennings, found poetry and sonnets, with the children writing their own poems using these styles. Confidence grew each week as each child was supported and encouraged to read their poems aloud to each other, culminating in a final public performance at Square Chapel Arts Centre before a packed audience of teachers, parents, friends and peers.

This final year of PoetryQuest saw 170 Year 5 and 6 children from three schools write their own compositions and perform them at Square Chapel Arts Centre. There were poems about speed, chocolate, teachers and animals in the forms of haiku, sonnets and kennings.

Penelope Wilton, star of Downton Abbey, The Best Exotic Marigold Hotel and  Steven Spielberg's BFG, was born in Scarborough and has family relations in Harrogate. At the event she spoke of her love of poetry and read three poems from children unable to attend the event.

Jeremy Newton, chief executive of Children & the Arts, said that the project has helped to improve the opportunities for children in Calderdale: “PoetryQuest opens children’s eyes to the inspirational world of performance poetry and spoken word and by empowering children to write and perform their own poetry. It builds literacy, communication skills, self-esteem and confidence.”

A pupil at Beech Hill school said:  “I wasn’t really looking forward to doing PoetyQuest because I didn’t like [poetry] at the time. Now I think poetry is amazing. It was able to extend my mind to the fullest and even though it’s hard it’s definitely worth it at the end.”

Winston Plowes said: “I am always surprised what the classroom offers on a project like this. Just when you think you might have heard everything, a Year 5 pupil stands up and the words 'Love is like a million marshmallows, floating down like parachutes,' appear.”

Keith Hutson said: "PoetryQuest is a bonding and friendship experience for the children: they learn to support each other, to listen – like an audience – to each other’s performances and to applaud each other. These things build a sense of togetherness – this is as important as the poetry and performances.”