The poetry of conflict: Clare Mulley on clashes that shaped England's history 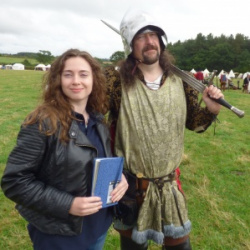 London Laureate and poetry journalist Clare Mulley recently became the first poet in residence at the UK Battlefields Trust, and will be reading from the resulting collection at the Albion Beatnik bookshop in Oxford on Thursday 20 April. In an interview with Write Out Loud, Clare talked about key battles and “the unfurling of English history”; about how studying Geoffrey Hill sparked her interest in writing about conflict; and how in a separate project she found herself standing on the pack ice of the Arctic Circle.

In the introduction to your battlefields collection Thorn Kings, you write: “The last few months have seen me getting sunburnt at re-enactments, trying on armour, reading poems over loudspeaker to gathering ‘armies’, tramping miles over country lanes, pushing through wheat fields full of nettles, sploshing through mud and puddles …” It’s not all glamour, then, being a battlefields poet?

Depends on your definition of glamour! Personally, I rather liked the helmet…but no, the process of writing battlefield poems certainly is a more rough and ready activity than most. It’s outdoorsy and there’s a lot of walking and hanging round what are essentially festivals, but with dress-up armour and tactics instead of a mosh pit. However, I think that’s the point - real battle is not at all glamorous, so there’s no reason why the job of the artist portraying battle should be glamorous either. In doing this project, I wanted to try and write about the realities of historical warfare as seen by human beings like us, both fighters and witnesses. In tackling a subject which is so tied up with geography and land, plus the extreme human experiences in relation to said land, I have to physically get into the space before I can begin to know how to start writing. That means a lot of time outdoors, walking, running, looking at maps, handling artefacts like musket balls, observing wildlife and trying to use the layout of the ground to imagine how it must have been for someone moving in that space under threat, or even wounded.

The poems in this collection focus on four key English battles – Hastings, Towton, Bosworth, and Naseby. What drew you to those in particular?

Firstly, you hit the nail on the head by saying “key” – I chose them partly because all four have played a crucial part in the unfurling of English history as we know it. The fact that, each time, a nation’s fate was decided upon in that short, violent space is fascinating to me. Each one holds its own unique interest as well. Hastings, the first battle most of us study at school, spells the beginning of our modern language, and Naseby was the pivotal moment which determined the success of a new, more machine-like type of army. Bosworth, again a school favourite, is brilliant for the sheer human drama, with its mess of loyalties and all the tangled threads of propaganda which came during and afterwards. I didn’t know so much about Towton until I studied Geoffrey Hill’s gorgeously bleak ‘Funeral Music’ at university, which refers to that battle – it was really studying Hill which made me interested in writing about conflict. Soon afterwards, I visited Towton and was instantly captivated by its unique atmosphere – that huge ridge with a plateau and one big tree, and everything falling away from it in swathes of wheat. It seemed made for drawing word pictures.

Your introduction states that councils often try to build on top of old battlefields, favouring development over “something that which should be protected by default … it seemed a good idea to write something which might help raise awareness, however small, and inspire more respect for these sites”. Do you think there has been much poetry written about these key events in our nation’s history?

About the events as they really could have been, no. Most of the battle poems I have read which cover historic warfare are classics like The Aeneid, Beowulf or medieval chansons de geste – epic or chivalric deeds based on myth and set to a metre, which has very little to do with the realities and is all about promoting the values and ideals of the age. Honestly, I’m no expert as to how much has actually been written about battlefields as an overall topic in our time. I was introduced to Geoffrey Hill by my course, which was accidental, and I know  writers like Kipling have composed poems about important points in our nation’s history, such as the signing of the Magna Carta at Runnymede. Marriott Edgar even used Hastings to write a comic rhyming ballad in Yorkshire dialect. By writing my poems, I wanted to address an angle I hadn’t really seen before – the shocking honesty of first world war voices like Owen and Sassoon combined with the sort of battles we learn as lines in a textbook, but don’t really grasp, as primary school kids. I think it’s refreshing and important for members of the public to learn about battlefields through imagining voices like theirs, or the voice of the land, and I hadn’t seen many “straightforward” poems on this topic. It’s not just a hobby – it’s my way of bringing old sites alive and making people care more about their fate, which is the key to their preservation for generations to come.

You’ve also taken part in an expedition to the Arctic Circle. Can you tell us more about that?

That was a residency, which involved about 30 artists from around the world, and it took place on an old, three-masted schooner in Svalbard. The idea was to use the time to respond to what we saw of the arctic environment, including its relationship to humankind and its delicate condition. It was animal heaven for sightings – walruses, seabirds, reindeer, whales and a polar bear – and we got to travel all the way to the pack ice above the 80 degree line and stand on ice floes. Definitely one of the greatest experiences I’ve ever had. I’m currently writing poems about it, and have already displayed one piece of work at an exhibition at Texas Christian University, which was a huge concrete poem about endangered glaciers with accompanying voiceover. My place on the residency was awarded to me by the Arctic Circle, part of The Farm, Inc. – an American not-for-profit organisation which provides a trigger for and supports projects combining the arts and sciences in less accessible areas – something which I think needs to happen a lot more. Arts and sciences are not really separate entities but parts of the same whole; combined creatively, they can do so much more to benefit the world around them.

Among other things, you were also shortlisted for Young Poet Laureate for London. Is a lot of your poetry associated with, or prompted by, particular projects?

Not really ... like most writers I have a massive file of unpublished, very mixed work undergoing editing, which generally stays buried in its cave. Most of it comes as and when I have an idea, and therefore there is very little linking of themes involved. As with everything, it’s the more defined projects which people actually see, as work is to a set theme, has a deadline and is intended for display, so it’s easy to assume a lot of my work follows those patterns. However, it’s fair to say I do write a good deal on the theme of Nature, whether in the historical context of battlefields or as I see it with my own eyes.

At your forthcoming reading at the Albion Beatnik bookshop you will be accompanied by harpist Tomos Xerri. Have you worked together before?

Yes we have, although so far only with Thorn Kings – he played at my launch, and we’ve had great fun experimenting with combinations of poems and accompanying musical themes and patterns. As an amateur musician, I have always loved exploring the links between music and poetry, and a lot of my studies have involved works which would have had bardic accompaniment on the harp or lyre. I really hope we will do more together in future; Tom is a ridiculously talented, lovely man and has played with so many orchestras – he even has playing for royalty on his CV. I’m so lucky to have the privilege of working with him. I’m also looking forward to reading alongside our guest poet for the evening, Camille Ralphs, whose amazing collection, Malkin, focuses on the Pendle witch trials of 1612. Camille and I were at the Tower Poetry summer school in Christchurch together in 2012, and she’s great fun to perform with.

Clare Mulley is a London Laureate and writes a monthly column for The Skinny. She will be reading from Thorn Kings on Thursday 20 April at the Albion Beatnik bookshop in Oxford, at 8pm. Entry £2.

Fish and chips, Adnams, an elusive butterfly: poets celebrate return to the seaside ►