Fish and chips, Adnams, an elusive butterfly: poets celebrate return to the seaside

“IT'S REALLY GOOD to be back in the Jubilee Hall – it’s something about the smell.” With those few words Tamar Yoseloff, a former Aldeburgh prize winner and editor of the Lookout anthology that was launched at the weekend, may have summed up for many the joy, enthusiasm and sense of coming home of Poetry in Aldeburgh, which was hurriedly organised by a team of volunteers to fill the chasm created and rescue a beloved event when “official” Aldeburgh organisers the Poetry Trust were forced to pulled the plug on their long-running poetry festival this year because of a funding crisis. To reinforce the exuberant mood, some poets even ventured into the North sea to give a short reading among the waves, and celebrate poetry’s return to Aldeburgh, with its fish and chips, Adnams beer, and landmark Lookout tower, scene of many poetry residencies.

Aldeburgh poetry festival was founded in the 1990s by Michael Laskey, who was spotted in the audiences at the weekend. A few years ago nearly all the events were shifted to the outstanding arts complex at Snape Maltings a few miles away – and yet it was clear in the last few days that many Aldeburgh aficionados regret that move. On Saturday in the Jubilee Hall, while Geraldine Clarkson was reading, a butterfly appeared and began fluttering around her, before coming to rest below the lectern, as though it was pausing to listen. It remained to steal the show for several more readings - maybe some kind of portent. 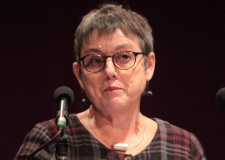 One of the Poetry in Aldeburgh team, Pamela Johnson, pictured left, a poet, novelist and creative writing tutor at Goldsmiths in London, said on Friday night in the Jubilee Hall: “I can hardly believe I’m here. It started with a few tentative phone calls in January. Daphne Astor asked me to call up Blake Morrison [a Goldsmiths colleague]. He didn’t hesitate in saying Yes. Getting the enthusiastic support of poets gave us the courage to go on.” At the reading which launched the weekend’s Jubilee Hall events, Blake Morrison told the audience: “I see recession and retreat when I look at the coast now.” His long poem, ‘The Ballad of Shingle Street’, describes that process, and he read others, too, such as ‘Covehithe’, scene of dramatic cliff erosions, and the snapshot ‘Sea Walk’. Anne-Marie Fyfe, sharing the reading, remembered enjoying that out-of-season feeling when working on poetry residences at Aldeburgh, including her spell at the South Lookout Tower last year, constantly “seeing the old made new”. 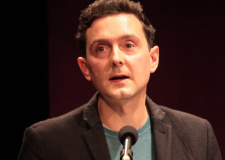 AT A BIG poetry poetry event there is often one standout moment. For me – and I suspect for many others too – it was on Sunday morning when Paul Stephenson, launching his pamphlet The Days That Followed Paris, read ‘Public names’, a list of the first names of the majority of those killed in the terrorist attacks on 13 November last year. Two Lolas, three people named Matthieu, two Nathalies, four named Christophe … It is the repetition of the names that strikes the heart; even more powerfully somehow when read, to my ears at least, in a perfect French accent.

Paul Stephenson lives in Paris. A few days after the attacks took place I emailed him to ask if he had anything to say about the atrocities and the aftermath that we might run as a piece on Write Out Loud. Paul took my suggestion seriously, but after a few days emailed back to say he didn’t think he could respond in that way. But he kept thinking about the question, and with the editing help of Helena Nelson, of Happenstance Press, after a few more months came up with a collection of 21 poems, including titles such as ‘Suspicion’, ‘Fear is’, ‘Chairs on Pavements’, and ‘Little Cambodia’. He said at Aldeburgh: “Paris is an amazing city to walk, it’s so compact … [walking] was a way of seeing the everyday defiance, how the city was expressing its pride, its municipal pride, its national pride.”  He concluded his reading with the cry: “Vive la France, vive la poesie, vive Poetry in Aldeburgh!” - and faced a long book-signing queue afterwards. 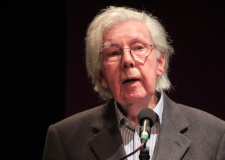 THERE WERE were other memorable moments, of course. The appearance of venerated Suffolk writer and one-time Aldeburgh resident Ronald Blythe drew a packed audience to hear his reminiscences and a few of his poems. He recalled EM Forster pushing a note under his door soon after he came to Aldeburgh, inviting him for drinks: “They gave me a glass of sherry but nothing to eat.” He became involved with Benjamin Britten’s Aldeburgh festival, and described the great composer thus: “Britten I was rather nervous of, an august figure … Peter Pears was a large figure in shorts, never said anything, but slightly threatening.” Among the poems Blythe read was ‘Inland Gulls’ (“screaming salty platitudes”), which was set around Aldeburgh. Others were about the poet Sidney Keyes, who was killed in action at the age of 21 in 1943; Bonnie Prince Charlie; and another poetic hero, George Herbert (‘Hey Mr Herbert’). He also spoke of Aldeburgh-born poet George Crabbe, and his “love-hate relationship” with the town as a result of financial difficulties that resulted in him having to undertake manual labour: “The humiliation of having to roll the barrels. Young people today don’t feel like that, but they did in those days.” Blythe was introduced at Aldeburgh by Maggi Hambling, sculptor of the famous Scallop on the beach.

IT WAS A CASE of poetry fixture congestion … the Saturday lunchtime Jubilee Hall reading with Geraldine Clarkson, this year’s National Poetry Competition winner Eric Berlin, and Ian Duhig had overrun, so much so that Duhig was cut abruptly short, much to his surprise.  So by the time I reached the South tower on Aldeburgh beach for the launch of the anthology Lookout, the place was packed and I couldn’t get in the door. I did buy the book later, though. The anthology is a tribute to the tower itself, containing work by poets who have been inspired by its location. Many of them came to Aldeburgh after being invited by Caroline Wiseman and Francis Carnwath, the “keepers” of the Lookout, and some of them were written in residencies at the tower that were sponsored by the Lookout or commissioned by the Aldeburgh poetry festival. As art dealer Wiseman recounts, Julia Bird once invited six poets to mount the spiral staircase and each spend a night alone in the tower. Anthology editor Tamar Yoseloff says in her introduction: “What Caroline has created is a refuge for artists, film-makers, writers and musicians to ruminate on the landscape. For those who’ve slept in the Lookout, with nothing more than a fire in the grate and a camp bed, it’s provided access to the sea and its mysterious movements.” 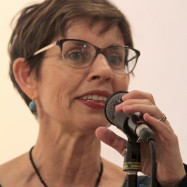 YOU HAVE to climb a few stairs to the Peter Pears Gallery - the other main venue at Poetry in Aldeburgh – but it was always well worth the effort. Jacqueline Saphra, pictured left, Annie Freud, and Jacqueline’s singer-songwriter son Ethan headlined a lively open mic there on Friday night. Lesley Saunders, with her Stephen Spender prize just announced, Claire Dyer and Susan Utting premiered their High Wire Act joint reading of poems about flight on Saturday morning. On Saturday night four poets -  Richard Scott, Edward Doegar, Anna Selby, and Chrissy Williams - introduced and pinpointed what they liked most about each other’s work. On Sunday morning Poetry Wivenhoe from Essex demonstrated their breath of talent and energy, reading from a number of their own publications. Other events in the gallery which I would have liked to have attended included the launches of the latest Rialto magazine, with Hannah Lowe and Fiona Moore, and the newish Fenland magazine, with its young and newly married editors Jonathan and Mary Totman. The tireless Poetry Society and Poetry School were in evidence at both venues, putting their name to readings and film screenings, and even a weekend competition.

AT TIMES Poetry in Aldeburgh had more of a regional feel to it than the Poetry Trust’s event, which was inevitable and no doubt intentional. Nevertheless, spoken word performers from East Anglia mingled with international visitors such as Eric Berlin, making his first major UK appearance, and Dan Burt, whose poem about renouncing American citizenship seemed timely. This was not a stopgap poetry event - more than 100 poets took part in it. Poetry in Aldeburgh have already announced that they will repeat it in the town next year, while the Poetry Trust is pressing on with plans to revive its festival in 2017. What could this mean – tanks on the beach at Aldeburgh, or just even more poetry in Suffolk next year? Watch this space!

◄ The poetry of conflict: Clare Mulley on clashes that shaped England's history