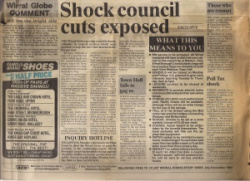 It seems timely, in more ways than one, to post this poem today. It was the local paper of my childhood, the Wirral Globe, which first introduced me to the concept of Fake News with its locally legendary series of April Fool spoof news articles. But it's chilling how close some of these have come to reality...

We argue still, my Mum and I,
about which of them came first.

One year it was Wirral TV: unplug
your aerial and re-tune. That’s all you did.
Long before cable,
or Murdoch with his satellites. Like that could work.
One guy pulled his aerial so hard
the goldfish bowl flew
off the telly top and landed
on the shag pile. Suffocated.

Another time, the Mersey Barrage –
renewable green power, years before
the buzz-words. Right across the estuary.
So big, they had to flood New Brighton seafront.
Letters of concern washed in like cockles.

After the riots, they sent Heseltine
strutting his quiff down several streets
like ours, to show they cared. Then, poll tax. Never mind
the docks they closed, mothballed submarines,
accumulated gutter mounds of turds,
un-swept plastic bags. Mum taught a kid
whose Saturday hobby was rooting on the tip.

The Globe’s best – the tranche of Council cuts.
Snatch squads to enter homes for overdue
library books. No bins to be collected; take
the rubbish to the tip yourself
in Wirral Borough Council plastic bags,
three fifty each from Wallasey town hall.
Schools to be open just three days a week;
water metering and tolls for roads.
It all seemed so far-fetched back then.

Now it seems they’re coming back:
ghosts, strolling through the wilderness they made.
New promises, new quiffs, new task forces.
New Tories, in case we’d all forgotten
the last lot. Showing they care this time.
And who’s that in the photo? Heseltine.

(This poem was first published in Orbis issue 145, and appeared in my debut collection A Long Way to Fall (Lapwing, 2013). The attached picture is a screenshot of the Globe article that inspired the poem, published on its front page in the issue dated 30th March 1988)

◄ Why I Will Not Keep Calm and Carry On