'Twee we're not!': whimsy, mysticism and tragedy in Harrogate 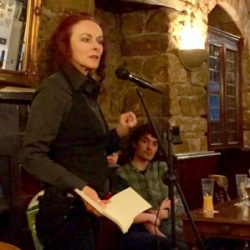 PPP has been held on every third Wednesday of the month for around eight years, based at the Tap & Spile, a traditional real ale pub in central Harrogate on Tower Street (up the hill from the famous Bettys tearooms, near The Stray), with ample parking close by. It is the proverbial “back room of the pub” set-up, offering welcoming atmosphere, supportive ethos and good beer.

Provincial we may be, but “twee” we are not. Guest poets have ranged from the very well-known, such as Helen Mort and Kate Fox, to local home-grown doorstep talent, such as Tim Ellis and (soon to come) up-and-coming local lad Dan Whitaker.  It is fair to say that most guests are from Yorkshire - with a modest entry fee, funds towards guest acts are limited - but we recently had Rosie Garland, pictured above, over from Manchester and Bee Smith from Ireland. Details of forthcoming headliners are on our Facebook page.

The format is usually a section of open mic, which can be signed up to on the night, then a drinks break, then the guest performer followed by another break, in which books can be purchased and then ending with further open mic. On some occasions there is no headliner, particularly during holiday seasons, and we have an extended open mic instead, with less pressure on timeslots.  As the name suggests, prose can be read but it has to be kept short. Most open-micers tend to perform poetry.

We usually have a decent-size audience with many regulars, some from the environs of Harrogate, many from around the county such as Leeds, Otley, Sheffield, Bradford and Hull. I usually MC - after all, this is the fun part amid the hard work of organising and publicising  - and we occasionally have a guest compere. The range of work presented always staggers me – humorous, whimsical, gut-wrenching, shocking, philosophical, mystical, confessional, tragic, moving. Occasionally people bring in soundscape or musical elements. It can be a good place to try out something new .

PPP has also participated in local events such as Poetry at the Parsonage in Haworth and Happygate festival in Harrogate’s Valley Gardens last summer.  There are friendly relations with other regional open mic nights such as Mark Connors’ Word Club in Headingley, and collaborations such as a programme I am presenting on running an open mic venue in ChapelFM’s Writing on Air festival on 1 April.

Newcomers are always welcome to come along and participate in open mic, or just listen. I am quite proud that we are a venue that attracts audience, as well as poets. Of course, they may just be there for the beer – which is very good – but they always seem to enjoy themselves. So give PPP a try sometime!

The next Poems, Prose and Pints with Siobhan Mac Mahon as guest is on Wednesday 15 February at 7.30pm