Caroline Smith and the poetry book 'that needed to be written' 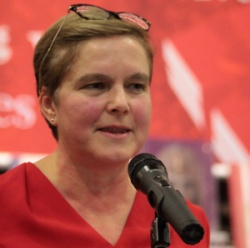 “I thought this was a book that needed to be written – and that I was in a unique position to write it.” Caroline Smith is the wife of Labour MP Barry Gardiner, and has worked for him in his Brent North constituency office on immigration and asylum cases for a number of years.

She is also a poet, and earlier this year published The Immigration Handbook, a collection of stories of cases that are in turns heartrending, funny, often anger-provoking, and sometimes uplifting, too. She went on: “No one’s identified, all the names are changed – but in the deepest way, all these poems are true.”

Smith’s collection is published by Seren, and I’ve reviewed it for Write Out Loud.  She was one of three Seren poets appearing at Stablemates, a regular event organised by Jill Abram at Waterstones in Piccadilly which showcases three poets from a single publisher on each occasion.

Introducing her poems, she said: “We do have a gallows sense of humour – we need that to survive. Some of the poems are funny. People are amazingly resilient and inspiring.” However, she warned that the climate she was working in was “getting much more difficult … it’s frustrating and depressing … we’re less able to help people. They almost don’t have time to claim asylum and make their case anymore.”

Introducing the first poem in her collection, ‘On Hold’, Smith said delay was a tactic used by the Home Office. A client began calling officials from a red phone box which is now long out of service: “Seventeen years have passed / with no answer.” A few years ago, she transferred files, and found she had amassed 32,000 pieces of correspondence from the government. Before she read the sad story of illegal immigrant ‘Valerie’, Smith said: “Some people we help aren’t angels, of course. They just have much heavier burdens than most of us have to carry.” 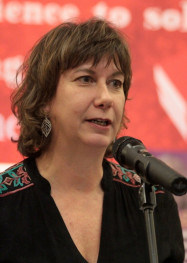 Fellow Seren poet, US-born Tamar Yoseloff, pictured left, who was generally reading from A Formula for Night: New and Selected Poems, which was published last year, opened up with an angry poem called ‘Trumped’. She was worried about some of the language in the poem “in this public place” – the fourth floor of Waterstones – but references to a “mire of filth”, a “furious fart”, and “trashing the house” certainly gave us the general idea. It’s due to appear soon on the political poetry blog New Boots and Pantisocracies that has updated its title to Neu! Boots are Made for Walking.

Part of the format of Stablemates is that Jill Abram conducts a brief Q&A with each poet before the start of their reading. I’ve been to poetry festivals where occasionally a badly-briefed committee member is roped in to do an interview when they clearly don’t know anything about the poet. Not here; Abram knows her stuff. She elicited from Tamar Yoseloff, a tutor who runs poetry and art classes, and who has collaborated with a number of artists in recent years, that “often the way into a poem for me is with an image”. Yoseloff read an ekphrastic poem called ‘The Black Place’ inspired by the Georgia O’Keeffe exhibition at Tate Modern, after an O’Keeffe painting of the same name. She said: “There isn’t any black [in the painting] … the black place is inside us.” Her poem refers to “the place inside the cave, where the sun can never reach”. 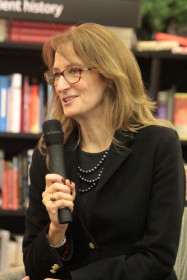 Third Seren poet Rosie Shepperd, pictured right, was called on by Jill Abram to explain the extraordinary titles of the poems in her debut collection The Man At The Corner Table, such as ‘If I buy you a Mojito, will you talk over meter while I watch how passion fruit slides down a glass’, or ‘It’s not just the underfloor heating that makes me lie down in the kitchen’ – titles that are often too long to fit the contents page at the front of the book. She didn’t really provide a satisfactory explanation, and only added to the mystery by revealing that “I always change the titles when I’m reading them, they tend to evolve.”

The poems are often about food and exotic locations, and are written in a sophisticated and humorous voice. Shepperd told the audience that of a lot of them came from her background in “aesthetic philosophy and critical theory … I bet you wish you’d stayed at home now. “ We didn’t, as it happens.

At the start of this satisfying, well-attended event Jill Abram read two of her own poems, including the recently published ‘At Sea in a Coffin’. Previous Stablemates, on the last Thursday of the month, have featured publishers Penned in the Margins, and Nine Arches Press. The next Stablemates, on 26 January, has Carcanet’s Kei Miller, William Letford, and Kate Miller on the bill.

Church Going: Larkin to be honoured at Westminster on Friday ►