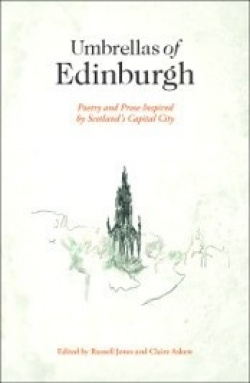 The title of this anthology is either a comment on the weather or, with its echoes of ‘Les Parapluies de Cherbourg’, a veiled nod to “the Auld Alliance”. This landmark anthology contains the work of 70 writers who either live in Edinburgh or have connections with it. The editorial brief to the writers was simple: choose a location in Edinburgh (from a very long list!) and write about it.

The contents are conveniently divided up into sections marked Ways In, North, West, Central, East and South. Curiously, there is no section marked Ways Out. As a long-time resident of Edinburgh, I found it more interesting to note some of the landmarks and places that had not been written about in the anthology – Jenner’s Department Store, the Scottish Parliament, Dynamic Earth, the trams, the ski slope on the Pentland Hills, Milne’s Bar (the celebrated meeting place of renowned poets from the not-too-distant past), The Royal Mile, Swanston Village and the Hermitage of Braid. Of the many locations that are included, some, such as The Meadows, Calton Hill, Easter Road, Waverley Station, Stockbridge, and Leith Walk are celebrated more than once. In ‘Ishtar on the Number 35’ Kevin Cadwallender, through the medium of the bus passenger, gives us a series of tableaux on Easter Road with commentary on the social status that is attached to living in different parts of the city:

People move in and out,

moving up to Morningside,

of social class to Stockbridge

to Granton or Craigmillar

Slipping under the great

In ‘Gallow lee’ (with that faint but perhaps deliberate echo of Galilee?) Colin McGuire delves back into the city’s dark past:

1697. Heads spiked above the city gates,

six witches’ necks cracked like kernels in a kiln;

thieves roasted before an open crowd,

strangled first to spare the screams …

but then goes on to assure us that “Leith Walk is breathtaking / in the afternoon.” A note beneath the title of the poem explains that Gallow Lee, literally the “field with the gallows”, was where several infamous executions took place, near Leith Walk.

The poems and short stories are wide-ranging in their exploration of the city and city life, and are vibrant and colourful. Buildings, bridges, restaurants and bars, hospitals, the Fringe, the Scottish Poetry Library, street noise, childhood memories, trips to museums and that all-embracing topic, the Edinburgh weather, are all to be found here. Readers can get a real feel for the place in poems like Chris Powici’s ‘The Night to Come’ whose opening stanza succinctly sets the scene:

where Thomas Henderson measured out the 20 trillion miles

from Earth to Alpha Centauri

in a six inch lens

but at least I’ve closed the Cafe Royal’s door

on a bitter east coast wind and –miracle of miracles-

found a window seat by some glad-ragged women

talking of work, husbands and the night to come.

Some of the poets focus on a single building or even a section of a single building but, far from being narrow in outlook, their poems become wonderfully expansive as they develop wider themes. Pippa Goldschmidt’s ‘Getting Lost in the Physics Department’ [King’s Buildings] is an example:

to get inside, you must want to hook together

those subjects which (on the surface) appear separate:

But after I’m allowed to enter

these are the only truths I can discover:

the room numbers are random

picture me as a scribble of lines on a graph …

Strong contributions from Marianne Boruch, Kevin Cadwallender, Sally Evans, Chris Powici, Patricia Ace, Pippa Goldschmidt, Helen Boden and Iyad Hayatleh are proof enough that Edinburgh can still inspire writers to do great things with words. Iyad Hayatleh’s moving tribute to the late Tessa Ransford, who did so much for poetry and poets and is sorely missed, was particularly welcome. The inclusion of a few poems in Gaelic (with English translation) and Scots helps to give a fuller picture of the Scottish literary scene.

The team at Freight Books are to be congratulated on bringing this project to fruition. The book is attractively produced and benefits substantially from having a helpful and informative preface written by Alan Gillis and a useful introduction from the editors. Brief biographies of the contributors are included at the end. Artwork by Nick Askew enhances the anthology and compliments the text. One of the strengths of this anthology is the way in which it succeeds in capturing a sense of place and the community that holds it together.  It is more about people than buildings, and represents a shift away from a romanticised past by bringing us a more realistic picture of life in the city today. Next stop, Glasgow?

Caroline Smith and the poetry book 'that needed to be written' ►

A superb, informed and fascinating review, Neil. Thank you.