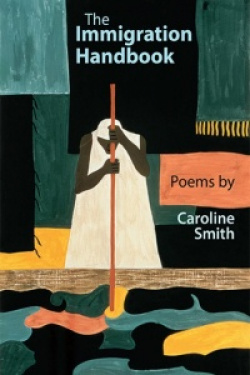 Caroline Smith’s collection The Immigration Handbook (Seren) is the product of her experiences as an asylum caseworker in the constituency office of a north London Labour MP, and the characters within these poems are composites of people she observed over a number of years.

Some poems are more “poetic” than others. ‘The Administrative Removal Officer’ likens the weary official to a gardener forever engaged in the act of clearing, “pulling away armfuls of climbers”. For most of the poem the language is faintly repellent  - “twisted ground … purple worms … sickly-pale apricot snails”. It concludes by describing the pity and destruction of this soul-sapping process: “I must clear this plot / steel my heart to dig up / perfect flowers in full bloom.”

On the other hand, ‘Delay’ appears to be a copy of a Home Office letter dated September 2015 which apologises for the nine-year hold-up “in progressing your clients [sic] application”, which has been outstanding since 12 December 2006. You don’t need a metaphor to know which way the wind blows in this case, or crafted language to tell this story any more clearly.

Like a dossier, the poems compile individual tragedies, such as the nurse denied citizenship because of a minor shoplifting crime many years earlier: “How she’d forgotten / until now, when the letter came / refusing them all … How she could see no other way - / how without her, they’d be allowed / to stay” (‘The Jumper’).

A desperation and determination to be allowed to remain sometimes leads to romantic deceit and broken dreams. ‘Spouse Visa’ tells the story of an older volunteer worker who allows herself to accept a young Turk’s claim that he has fallen in love with her.  She hadn’t been back on the rota to help since he left, but had signed his papers anyway, because “for two years / she had been the moon’s grace, / had shed the wrinkles of her old age”.

Sifting among the heartbreak of wasted lives, such as the doctor from Paktika province in Afghanistan who has been trekking out to Hounslow each week for seven years to sign his name (Eaton House’), there can be found occasional lightness, such as the unwitting comedy of broken, misspelt English: “I love your cuntry … I have applied for neutralisation … I was arrested by six uninformed guards … With wormiest regards” (Letters’).

And I will quote in full the five-line poem ‘Father’, which in its brevity expresses how the demands of unbending, heartless officialdom can uncover family secrets that could and should have remained hidden:  “He had finally saved enough / to bring his family to join him; / but DNA tests show that / only two of his three children are his. / The middle one has been refused a visa.”

This is poetry that is about something, that needs to be written.  In these strange and disturbing times, Caroline Smith’s sympathetic and enlightening poems reveal the complicated truths behind the tabloid headlines, and show that poetry can be employed in significant and important ways.

Write Out Loud at Stockport art gallery on Monday tonight ►