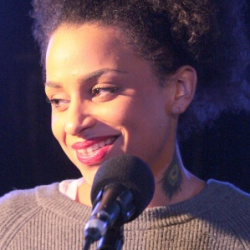 A wealth of young poetic talent was on show at the Troubadour in London on Monday night in an evening curated by 2016 Eric Gregory award winner Dom Bury, a member of the Coffee-House Poetry team at the Troubadour, who was given the chance to organise and compere an evening rich with achievement and promise.

The undercurrent was last week’s earth-threatening  - if, hopefully, not earth-shattering – political news from the US. As Edward Doegar said, ominously: “News can stay news too long.”

A number of poets read single poems in the first half of the evening, with four more having longer sets in the second half. The first half highlights included the sounds captured within Gaudi’s unfinished Sagrada Familia cathedral in Barcelona; a witty poetic portrait of Jane Austen’s Emma; reminiscences of a tin-miner father; two poems that required audience participation; and a sensual and disturbing poem apparently about a crocodile.

Abigail Parry, who was at the Troubadour only two weeks ago to pick up her £5,000 international competition first prize, took a light-hearted look at one of Jane Austen’s most notable characters: “Emma, you’re a gamer … those little zigags of embarrassment …  the surliest grammarian would melt to see you dance.” 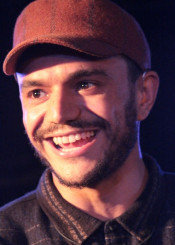 Spoken word artist Raymond Antrobus, pictured left, told his audience that he was born deaf, and didn’t start to speak until he was five. His poem ‘Echo’ includes these lines: “Gaudi believed in holy sound /and built a cathedral to contain it.” The poem goes on to say: “Even though I have not heard /the golden decibel of angels / I have been living in a noiseless / palace where the doorbell is pulsating / light and I am able to answer.” John Canfield’s poem ‘Shift’, was about his dad, a miner in Cornwall, “a later-day Poldark, if you will”. Richard Scott’s uneasy reptilian poem talked of “flirting with wildness, the green violence in the shadows, his … body slipping through sediment and weeds”. Other performers in the first half were Donald Futers, poetry editor at Penguin who has revived the Penguin Modern Poets series and has talked of a new “golden age for poetry”, plus Soul Patel, Ali Lewis, Ella Frears, Joey Connolly, Rishe Dastidar, Susannah Hart, and Rowena Knight.

The second half of the evening focused on four poets – Rachel Long, Alex MacDonald, Kate Wakeling, and Jon Stone. Long, pictured, top, who leads Octavia, a poetry collective for women of colour at London’s Southbank Centre, said a number of her poems were about sex and relationships; in ‘The Art of Undressing’ she tried something different, “making the words striptease”.  In ‘Oil and Water’, she spoke of where she lived now, a place where she found it difficult to write, and of associating with people that she found difficult to mix with.

The surreal humour of Alex MacDonald, another 2016 Eric Gregory award winner, often had the audience in hoots of laughter. In ‘You Are Most Welcome’ he talked of his books growing “dusty moustaches”, while on ‘Hungerford Bridge’, “I was as lonely as a bomb disposal robot”. Introducing a poem about growing up playing computer games in Essex, he lamented the lack of an earthier upbringing of the kind that Seamus Heaney and Ted Hughes had enjoyed. 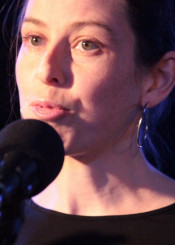 Kate Wakeling, pictured right, who was praised by Dom Bury for her “irresistible energy”, read two poems that took offbeat looks at Shakespeare, and another about qualms in the lift at Lambeth North tube station. Jon Stone produced an untitled, fresh tribute to Leonard Cohen, last week’s other seriously bad news, with words and patterns that reflected the rhythms of the Canadian poet and songwriter:  “His words that ID him as one of love’s martyrs …  here he comes now, with his own heart unconquered … “ He also introduced a sequence of poems about “the downfall of civilisation” by saying: “Events have conspired to make this extremely relevant.”

Alex MacDonald paid tribute to the range of poets that Dom Bury had assembled on Monday night, but also insisted that poetry generally was “dominated by unnecessarily successful white men”. He concluded his set by reading a poem by an American transgender poet, observing that “marginal voices are more important than ever at this time”.

I’d heard some of the young poets at the Troubadour before; others I’d heard of, but I was hearing and seeing them for the first time. You could feel the enthusiasm, hear the laughter, tap into the energy there on Monday night. There’s a great deal of hope for the future.

◄ What It's Like To Be Alive: Deryn Rees-Jones, Seren

Hilariously terrible? So bad it's brilliant? Contestants line up for anti-slam national final ►