Breakdown of "I walked in darkness" 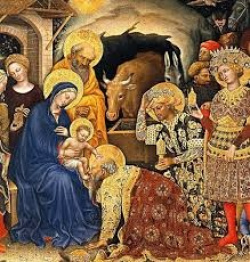 Often, when I don't understand a poem, I've been glad of people explaining it to me. So I'm paying it forward, by breaking down one of mine for you. Here it is:

I WALKED IN DARKNESS

I walked in darkness. Many a lonely mile,
my eyes and footsteps hesitant and blind,
I sought a kindly light I did not find
in land or ocean, asking all the while
if lightless lives are taken in exchange
for light eternal; still the shades of sight
would whisper, "Even I shall see the light!"
I never thought the light would look so strange.
Not in a temple, echoing and awed,
Not in a palace, glistening and grand,
Nor in my home, nor any friendly land.
But distant, dirty, in a shed abroad,
I met a maiden bloody from a birth
and in her arms, the light of all the earth.

This poem began when Kathryn Rose asked me to write something for Epiphany, which is the day Christians remember the wise men visiting Jesus. Epiphany falls on 6th January, in the darkest part of winter, so I wrote a poem about darkness and light. And because the wise men were on a long journey, and because Christians use light as a symbol for Jesus, I wrote a poem about a long walk in the darkness looking for a light. I was remembering the times I've been walking down a dark country road at night-time, always on the look-out for cars and often tripping over bumps and ditches.

I walked in darkness.

The poem starts with a sudden short sentence. This isn't the usual way poems begin, and it catches your attention.

Many a lonely mile,

There's a pattern of sounds here (an "alliteration"), like this: Many a LoneLy MiLe. All these are sounds you can keep on making ("sonorants"), rather than sounds that stop like "t" and "d". So this reminds you of the journey going on and on.

my eyes and footsteps hesitant and blind

If I said your eyes were hesitant, and your footsteps were blind, it wouldn't make a lot of sense. But it does make sense if your eyes are blind and your footsteps are hesitant. The order of the body parts is backwards from the descriptions. This is called a chiasmus. It feels awkward, to remind you of stumbling in the dark.

I sought a kindly light I did not find
in land or ocean,

John Henry Newman wrote a poem called "Lead, Kindly Light" which uses similar symbols to my poem. But in Newman's poem, the "kindly light" is like a lighthouse-- it shines in front of him all the time he's walking in the darkness, showing him the way to go. In my poem, the wise men are walking in complete darkness. They'd love to see a kindly light, but they can't.

asking all the while
if lightless lives are taken in exchange
for light eternal;

In other words, they've lived their whole life in darkness. So they're asking, when they die, do they get to swap it for living in heaven where there's always light?

"Light eternal" is a symbol for heaven. It comes from an old Latin prayer for someone who has died:

I originally wrote "for light perpetual", but then I realised that some people say "perpetual" with three syllables, like me, but other people say it with four. So I changed it to "eternal".

...still the shades of sight
would whisper, ...

People often say that someone has "seen the light" when they start following Jesus. I think it refers to the story about St Paul seeing Jesus as a bright light on the road to Damascus. It left him blinded for a while.

I never thought the light would look so strange.

This poem is a sonnet, and there's a rule that sonnets have a change of subject (a "volta") somewhere around the eighth line. That's where we are now, and I'm finishing this part by giving you a shock. All the lines before this one didn't end with a full stop-- the sentences ran on to the next line. This is called enjambment. But here, we suddenly have a line which is a sentence all on its own. It startles you a bit, like the short sentence in the first line.

When people talk about "seeing the light", they don't explain what the light looks like. In this case, the light I've been looking for all this time turns out to be something I didn't expect. That's what the next part of the poem is about, and this line guides you into it.

Not in a temple, echoing and awed,
Not in a palace, glistening and grand,

You might expect to find Jesus somewhere important, like in a palace or a temple, but that's not where he was. You might remember that two of the wise men's gifts were gold (like you'd find in a palace), and frankincense (a kind of incense that would be used in a temple).

Nor in my home, nor any friendly land.

People often feel safe around people like themselves, and they treat everyone else as outsiders, different and scary. (This is called "othering".) Just as you might have expected to find Jesus in a temple or a palace, you might expect him to be someone safe, someone like you. But in fact Jesus was an outsider: a poor person, a homeless person, part of a nation who were hated, and a refugee.

But distant, dirty, in a shed abroad,

The Bible says Jesus was born in a manger, which is a food trough for animals. You would find a manger in a farmyard, or a shed. "Distant... abroad" picks up on "nor any friendly land", and "dirty, in a shed" picks up on "not in a palace". This is another chiasmus pattern.

Also, there's a play on words here. An old translation of the Bible says that "the love of God is shed abroad"-- in modern English we might say that it was spread everywhere. So we're talking about Jesus as the sign of God's love.

I met a maiden bloody from a birth

The sound pattern here goes M-M, B-B. As we saw earlier, "M" is a sound you can keep making. But "B" is a stop: again, it pulls you up and makes you listen.

The Bible says that Jesus was conceived by a miracle, because Mary was a virgin: she had never had sex with anyone before Jesus was born. "Maiden" usually means a young girl these days, but it once meant a woman who is a virgin.

When a baby is born, there's a lot of blood. (Check YouTube if you want to see videos.) I'm mentioning the blood here to remind you of the "dirty" and "not in a palace" parts earlier: when we see nativity scenes they're always very clean and tidy, and the real thing wasn't clean or tidy at all.

Also, starting the line with "maiden" but ending with "birth" reminds you how strange it is for a virgin to give birth.

and in her arms, the light of all the earth.

One of the first things someone does when they give birth is to take the baby in their arms to breastfeed it. Mary has Jesus in her arms.

When he grew up, Jesus called himself "the light of the world", and he's the light that the wise men have been looking for all this time. (You might know the famous painting of Jesus holding a lantern and knocking at someone's door.)

Kathryn Rose set my poem to beautiful music. Now you've read about the poem, you should go and listen to it!

Not too long ago - when Britain was Christian - this would have been easily understood. The background of the `message` and explanation of the word and sound `tools` used to make it a poem are very useful (I would like to see them used more often)

I feel that there might have been a temptation to write it in the persona of one of the wise men, but I think the way it is done (as an `I`) makes it much more universally applicable.

`Light is a universal metaphor for the (unamed) Jesus - who`s status as creator of the universe is pointed by the lack of the `grand` in the `shed` of his birth. The `bloody`- ness is a reminder of meatiness of incarnation and the future crucified fate of the flesh of her flesh. The whole poem is a kind of startle into the reality of what it
means for God to be made man. It strips the decorative gold cladding off the body of what Christ becoming man
is actually about.

The poem and the picture would `work` on their own (but
maybe the shed more scruffy, and the wise men outside)

Good one to talk about on a Sunday.

This resembles the style chosen by G.K Chesterton for his
short poem "The Donkey" - leading the reader towards the
"ah yes" enlightenment of the final words. The attached
notes were interesting, both for the chosen material and
its presentation. Thank you for the effort towards our
own enlightenment...although I suspect the quality of the
poem was itself a reliable guide towards our understanding.

Excellent sonnet, and thanks for the explaination, much appreciated.