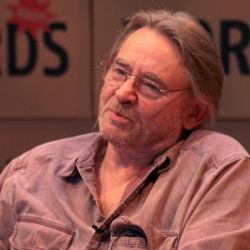 Tom Pickard, who as a teenage poet was instrumental in Basil Bunting's return to writing in the 1960s, will be taking part in an evening of poetry, film and music in honour of Bunting at the Black Huts festival of writing, music and film in Hastings on Saturday 29 October.

In 1963, with his first wife Connie, Pickard founded and ran the Morden Tower Book Room in Newcastle, where he organised a series of readings by British and American modernist tradition poets, including Bunting. There were celebrations to mark the 50th anniversary of Bunting’s acclaimed poem Briggflatts earlier this year.

Pickard will also be reading from his latest collection, Winter Migrants, at the festival on Friday 28 October, with fellow poets Maggie O’Sullivan, John James, and Nicholas Johnson. The Black Huts festival, at the Beacon and Electric Palace venues in Hastings, is from 26-30 October. It is organised by Nicholas Johnson, publisher of Etruscan Books. More details