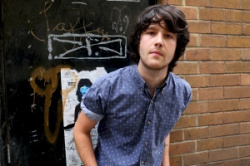 Matt Abbott is one of three spoken word poets who have been recently featured on TV taking parts in adverts for the Nationwide building society. In an interview with Write Out Loud, he talks about why he agreed to become involved – and why he sees it as a great opportunity for spoken word in general.

Congratulations on your role in the Nationwide ads. Seeing spoken word on primetime TV feels like a breakthrough moment! Did you write that poem specifically for Nationwide? How did you get involved in the first place?

I did write the poem specifically for Nationwide, yes - although we had a very loose brief (mine was ‘the importance of a place to call home’), and it was very important that we were allowed to write about whatever we wanted, in our own styles. As in, if they’d asked us to write about Nationwide itself, or any products, then I personally wouldn’t have agreed to do it. As it is, it’s just me reading my poem, followed by their logo. So essentially it advertises me just as much as it advertises them. Also, as you say, it feels great having spoken word on primetime TV. Quite a few adverts rhyme nowadays, but they feature actors reading something written by someone in marketing. Whereas these are proper poems read by proper poets, which can’t be a bad thing.

One or two comments, maybe a little tongue-in-cheek, on our news story have referred to you poets “selling out” by appearing on a TV ad. What would you say to that? (The rest of the comments have been overwhelmingly in favour, btw)

Well, I haven’t read the comments and I don’t intend to! I’m very aware that people will accuse me of “selling out” and I can understand why somebody would think that. At the end of the day, I made a private professional decision for my own reasons, and I’m comfortable with it, and it’s not really anybody else’s business – but at the same time everyone is entitled to their opinion. I do maintain that this is an exceptional ad campaign, in so far as we’re reading our own poems (albeit to their brief). As I said before, if I’d been reading a rhyming jingle about interest rates for first-time buyers then yes, that’d be a complete sell-out. But this is a marriage of my words and their message – exposure-wise it’s a great opportunity both for me and spoken word in general. And to be blatantly honest, the money has allowed me to invest in my career. I’m a full-time poet, which is hard graft, and this will allow me to do a few things that wouldn’t previously have been possible. So therefore I’m willing to take any stick that comes my way. There are very few poets who’d have turned down the opportunity if it’d come their way – and I dare say that includes a few of the naysayers.

You’re also a poetry promoter and facilitator, first with the excellent A Firm Of Poets, which you co-founded with Ralph Dartford, and more lately with your spoken word label Nymphs & Thugs. Can you tell us more about those two projects?

A Firm Of Poets is a spoken word organisation which Ralph and I co-founded in summer 2013. We’d seen a lot of spoken word at Glastonbury that year which seemed quite elitist, academic and not very accessible – quite smug essentially – and we were inspired to try and do the opposite. As in, showcase really high quality spoken word which was accessible to the masses. Since forming, we’ve performed at a variety of festivals nationwide, we ran a 22-date national theatre tour (‘Ossett Observer presents The People’s Republic of Poetry’), we recently delivered the Word On The Street project in Hull (in partnership with Freedom Festival), and we run a very successful night called Unity Words in Wakefield (in partnership with Wordlife). We’ve worked with a range of folk, from internationally renowned acts including Buddy Wakefield, through to first-time writers and performers – some of which are now enjoying regular spoken word work. It’s been a fantastic project in terms of developing, sharing and connecting, and long may it continue.

Nymphs & Thugs is an independent spoken word record label and newsfeed. We started by releasing two albums for Louise Fazackerley, as well as my own album for last year’s Edinburgh show, and are about to release an album for Salena Godden. We also released for Toria Garbutt earlier this year, which has gone down a storm. As well as the albums, we produce a quarterly spoken word zine called Soapbox, and our Twitter account runs as a daily news, content and event source for spoken word worldwide. It’s all about increasing engagement in spoken word, and showcasing alternative voices. It’s a punk/DIY set-up, and to be fair, the Nationwide ad has helped me to take things up a few notches.

In your early days you have described yourself as a punk poet, and you’ve appeared on the same stage as John Cooper Clarke, Carol Ann Duffy, Kate Tempest, Luke Wright, Helen Mort, Mike Garry, and Elvis McGonagall. You’ve also espoused “kitchen sink realism”, and many of your poems are political. Can you tell us more about your artistic outlook?

JCC was central to me starting out. For the first seven years of my career, my only spoken word performances were at music gigs, festivals and political events. It was all about poetry where poetry wasn’t wanted or expected, which essentially I guess is what punk poetry was all about. I had a decent hiatus as lyricist and frontman in the band Skint & Demoralised, which shifted my focus away from poetry, and when I fully returned in 2013, I’d matured in terms of my writing style and outlook. Kitchen sink realism has had a huge influence on me and still plays a part in my writing – I think I’ll always be about realism, commentary or satire – and I suppose my main aim is to recapture the British new wave within a contemporary landscape. But then no writer has a masterplan – it has to come naturally, otherwise it just sounds contrived. I do need to write more punk poetry though because I do a hell of a lot of political events, and it always comes in handy having stuff like that up your sleeve!

After an early spell as a compere, you performed with Skint & Demoralised, and were at one time described as the next big thing by national newspapers. Now you’re a nationally known spoken word performer, familiar on our TV screens. Do you see yourself as ever going back to music?

I would like to, and we’ve tentatively discussed doing an album next year to mark 10 years since we formed. But I’m so immersed in spoken word at the moment that I can’t see myself having the time or the headspace to do anything else. I’ve been doing it 10 years now, and it really feels like a lot of my hard work and skill is paying off, so it seems to make sense to strike whilst the iron’s hot, as it were. I wouldn’t rule out a return to music, in fact at some stage it’s highly likely. But right now, the UK spoken word scene is an incredibly fun place to be, and I want to be as involved as I can. My natural home is with spoken word and I think you need to play to your strengths if you’re to reach your full potential. We’ll see!

Write out Loud loves your paean to an all-night pie shop in Wakefield, and suspects you must get regular requests for it. Do you ever get tired of performing it?

Haha! Yes and no! It’s very fun to perform, and almost inevitably attracts a warm response from the audience, which as a performer you’re bound to enjoy. I feel far less comfortable performing it when I know there are people in the audience that have heard it a dozen or more times, but you have to remember that most people are hearing it for the first time. As a performer I think you’re always battling between artistic gratification and audience satisfaction. I think it’s crucial to find a balance really. To be 100% honest, yes sometimes I do heave an internal sigh at the thought of doing it, that’s only natural, but everybody has an ‘Angels’ in their set list and to be fair it’s very useful having a poem like that in your arsenal! The worst thing is worrying about when I’ll be able to write the next one … the clock is ticking!

Poets join musicians at events in support of foodbanks ►

Now he marries his words with the message of a bank to get the money to invest in...POETS and POETRY. Can't see the problem myself.

Nicely done all three poets - this is what we want, more exposure.

'..once described himself as a punk poet...' hahaha now he 'marries' his words with the message of a bank!! =-)

"..I do maintain that this is an exceptional ad campaign, in so far as we’re reading our own poems (albeit to their brief). As I said before, if I’d been reading a rhyming jingle about interest rates for first-time buyers then yes, that’d be a complete sell-out. But this is a marriage of my words and their message.."