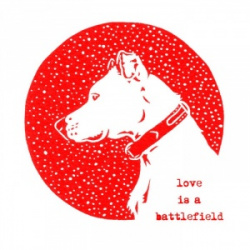 Eight years ago, Louise Fazackerley went to a event in Wigan organised by Write Out Loud host and poet and lyricist in his own right, John Togher.  Like the birth of many a performance poet, this proved to be the gateway to a whole new adventure.  Since that night, she has gained a well-deserved reputation as one of the stand-out performance poets of the north.  Described as “a great performer” by Will Self, and with a “powerful, powerful voice” (Ian McMillan), Louise is a multiple poetry slam winner and has many festival appearances under her belt, including a stint as poet laureate for Kendal Calling.

As one of the winners of BBC Radio 3 The Verb’s New Voices in 2014, she created the show Love Is A Battlefield and took it to the Edinburgh Fringe this year to great acclaim.  The show has now been recorded on the Nymphs and Thugs label, founded and managed by fellow poet Matt Abbott, and is available on both old-skool CD and digital download.

The album is about love, post-traumatic stress disorder (PTSD), and the consequences of war on the social and domestic lives of soldiers and their families. And how does a poet love a soldier? This deeply moving collection of poems contains profound insights into conflicted relationships - internationally, domestically and culturally.  It is a finely balanced assembly of opposites – the adult world and the child’s perspective, discord versus harmony, soldier versus soldier, soldier versus poet, soldier versus himself.

Featuring some haunting musical backing from Lee Affen, skilled in creating soundscapes for emotional states, the tracks walk us through the grim realities of life for the soldier and the poet. Set against a backdrop of northern working-class life, but woven like a mill-spun tapestry with the sights and sounds of a war zone, we’re taken through the streets, “let me show you where we lived”. Back-to-backs where the “dogs are muscular”, with masters who are “the walking dead”, where exploding brick dust is the colour of sand, and where she reveals what makes the poor so ripe for military picking, “join the army, travel the world”, and why ”poverty is the primer”.

In the opening poems, the challenges faced by families living apart are confronted with a mixture of tenderness, frustration, and resigned acceptance. Northern cultural references are liberally scattered throughout, the poet placing us firmly in this location, and we are taken on a journey to collect the soldier husband home from a six-month tour of Afghanistan. It’s all breathless anticipation at the reunion and unspoken analysis of his physical wellbeing, naively unprepared for the war-torn psyche.

‘Weather Report’ has to be one of the most physically and emotionally affecting poems I’ve  heard.  Using a snow globe as a metaphor for being on the inside looking out, for experiencing the chaos and confusion of the whirling snow or sand, it panics and disorientates.  All control is lost.  There are sudden flashes of alcohol abuse and domestic violence, common to PTSD.  Delivered in a tug-of-war tone between aggression and bewilderment, we hear how she “can’t open the door in case the nightmares fly out … in case someone hears  him … in case the sand pours out and it makes a roadblock and no one can get to work and people sink in it and go under …”  The sense of isolation and alienation are in stark contrast “in this indeterminable winter” to the people passing by outside in blissful ignorance, to the folk untouched by this living nightmare.

In ‘Bolton’s Party’, we experience the ‘but I only saw him yesterday’ feeling when faced with sudden death.  We meet a grieving mother and are shown the decreasing attendance at the deceased’s anniversary gatherings, then are reminded of the increasing death toll of young men.  We’re forced to question the wisdom of war and the humanity of those in authority.

Using a clock’s hands and the ubiquitous plastic poppy as metaphors for war wounds, the last track ‘Remembrance Someday’ is aflame with anger and frustration at the endless repetition of military conflict without resolution, the damage done to the psyche of each generation of working class men and their families, and contains some of the most accurate depictions that I’ve  come across of the flashbacks and dissociation common to PTSD. “Why do we remember, but never seem to learn?” is the final plaintive question, one which many of us have asked ourselves too often.

It’s no exaggeration to say that this collection is the equal to famous war poetry that you may already be acquainted with, although with a (as far as I know) unique perspective within the genre. This is no clumsy but well-meaning attempt at empathising with or decrying the horror and atrocities of war. It’s the finger digging in the open vein of experience lived and then dragged tragically home through the front door, wearing a wedding band and bearing invisible wounds. This is the real deal. Louise Fazackerley does what poets do so well – documents the raw realities, the bitter-sweet truths, delivers the alternative to the happy-clappy all-in-it-together learn-a-trade public face of living in a world where sudden horrific death is all around, where killing other human beings is the norm, and where the madness repeats itself unwillingly in the cruel second world of PTSD.

I finished listening to it with a heavier heart, with my emotions in a state of high arousal, choked up and feeling … well … traumatised. I carried it with me all day and all night, knowing that this was only the merest hint of a shadow of the bloodstained and fractured reality of the soldier and the poet.

I cannot recommend this album highly enough, it is astonishingly good. The sale price is £5, p&p on top. However, there is no upper limit to what you can pay, so you can put your own price on it.  I’ll leave that up to you. Now where did I put me hanky?

Thanks Shirley - yes, I think the same. Astonishingly great!

I saw Louise perform 'Love is a Battlefield' earlier this year and was spellbound throughout. I think it is a poetry masterpiece which will become a classic.

Ahh god I remember reading your article Julian - how can that be a whole year ago?!

Our CD should be landing today. Can't wait for Bob to hear it all :)

Louise performed this for us at Risk a Verse - see review - http://www.writeoutloud.net/public/blogentry.php?blogentryid=45661
and it was probably the best piece of performance poetry I have witnessed. The capacity audience was mesmerised, so get along to see it as it is a brilliant piece of theatre and writing.

Cheers Steve - yeh, you're in for a real treat! It's beautifully produced too, and 'feels' like an album, in that the tracks flow into each other to tell the story :) NB: don't listen to it on a comedown ;)

John - wooo, didn't know about that! Will deffo be along for that.

A fantastic piece of work, hopefully to be performed on a much bigger scale (sort of) in Wigan next year.