Autumn at the SoapBox Poetry Club 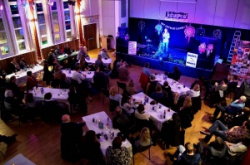 Summer has passed and autumn is rolling in - which means the SoapBox Poetry Club is back. Our regular poetry night held at the John Peel Centre, on the last Wednesday of the month, features a nationally renowned poet as a headliner, two local poets and one musician in support. We book exciting, passionate and political young poets. Those at the forefront of poetry in the UK. The kind of writers and performers that make poetry so very relevant to our everyday life. I am often asked where I first encountered these poets so please read on to find out. They all have websites so do 'click' on their name and it will take you to more information.

JESS GREEN is the September 28th headliner. I met her when she was performing at Bestival (Isle of Wight) as part of Scroobius Pip's Satin Lizard Lounge and I was completely blown away. Her committed delivery, unashamed political content and ethical approach means she is 'the real deal'. She lives and breathes her values. Coming out of Leicester, she worked for many years in schools - which is what inspired her viral success 'Dear Mr Gove'criticising the Conservative reformations of the education system. Teachers, librarians, support workers, educators, this gig is for you. Come and feel inspired, valued and supported. We love you!

Jess has performed at Glastonbury, Latitude, Bestival and the Edinburgh Fringe and in 2014 her poem, Dear Mr Gove received viral attention on Youtube and has now reached more than 300,000 hits. The poem was taken from her critically acclaimed poetry and music show, Burning Books which she performs with her band Jess Green and the Mischief Thieves. Burning Books received a host of 5* reviews at the Edinburgh Fringe in 2015 and was toured nationally at the end of last year.  Her first collection of the same name was published by Burning Eye Books in September 2015 and was shortlisted for the East Midlands Book Award 2016. She has written for Channel 4 and the BBC and her work has received acclaim from artists such as Josie Long and Scroobius Pip. She is now working on her first full length play.

“Punchy, she struck a chord” – The Guardian

“Brilliant. Her words have certainly struck a chord with teachers” – Huffington Post

DEAN ATTA is the October 26th headliner. I came across Dean when his poem 'I Am Nobody's Nigger' was filmed for SBTV Youtube channel - to huge effect! Its rare for a poetry video to have so much of an influence on me. Its a very powerful piece of work. Inspired by Stephen Lawrence and the lyrics of hip hop, Dean takes a fresh look at why language choices in music (and life!) are so very important. This bold poem is an absolute inspiration and as Apples and Snakes say 'Dean is “unafraid to tackle topics other poets turn a blind eye to". I last brought him to Suffolk in 2012 and four years later we are still talking about that gig. Come and see why for yourself.

Dean has been described by the Huffington Post as “one of the leading lights in London's poetry scene”. His debut collection, I Am Nobody’s Nigger, published by the Westbourne Press, was shortlisted for the Polari First Book Prize. He was named as one of the most influential LGBT people in the UK by the Independent on Sunday Pink List and featured in Out News Global Pride Power List. He has performed across the UK at festivals such as Brighton Fringe, Cheltenham Book Festival, Edinburgh Festival Fringe, Hay Festival, Latitude Festival, Secret Garden Party, and internationally at Biennale of Young Artists from Europe and the Mediterranean (Italy), CrossKultur (Germany), Ordspark (Sweden) and Word N Sound (South Africa). Dean is a member of Keats House Poets and Malika’s Poetry Kitchen, as well as an Associate Artist with Mouthy Poets and New Writing South. He has been commissioned to write poems for BBC Radio 4, BBC World Service, Dazed & Confused, Keats House Museum, National Portrait Gallery, Tate Britain and Tate Modern. He is currently working on his second poetry collectionThe Black Flamingo.

ANTHONY ANAXAGOROU is the headliner for November 23rd. Anthony was gigging at Camp Bestival, as part of Chill Pill, when I first heard his work. It left such a mark on me that I went home, subscribed to his blog, befriended him on facebook and pretty much read everything he wrote. He is a poet who leaves you gasping for breath, your soul lifted and your eyes uncovered. My current favourite of Anthony's is 'If I Told You' on Youtube. It takes on the challenge of reframing human history and is jam packed with little known facts. Revelatory, bold and ridiculously clever, his work picks apart the legacy of colonialism. I simply can not wait to finish the SoapBox Poetry Club year with this brilliant writer.

Anthony Anaxagorou is an award winning poet, prose writer, playwright, performer and educator. He has published eight volumes of poetry, a spoken word EP, a book of short stories and has written for theatre. His poetry has appeared on various BBC programs over the past decade, while also featuring at the British Urban Film Awards and BBC 6 Music. In 2013 his poem Dialectics was interpreted and performed by Cirque du Soleil in Las Vegas. He is a judge for the 2016 BBC Young Writers Award and is currently the poet in residence at several London schools where he teaches poetry and creative writing. In 2015 his poetry and fiction writing won him the Groucho Maverick Award. He founded Out-Spoken in 2012 and has since launched Out-Spoken Press, a publishing house specialising in poetry, plays and critical writing. His work has subsequently been studied in universities, schools and colleges across the USA, U.K and Australia, as well as being translated into Spanish, German, French and Japanese.

There is a 3 poem playlist on Youtube featuring one poem from each poet. Do have a listen/look to find out more of what you can expect. Each event also has two local poets and one musician in support - all held together by everybody's favourite Stowmarket poet Dan Clark. Expect lots of silliness and fun, alongside the political commentary and call to action. Tickets are super cheap at only £4 concession, £6 advance, and £8 on the door. All drinks are £3 each and the centre is run by volunteers. We are completely unfunded and rely on ticket sales to cover costs so please tell you friends and come and see something truly remarkable. I promise you it will be life-changing. Bold statement I know. But its true. Come watch and then tell me otherwise. I dare you. Its simply not possible.

>>> Youtube playlist of 3 poems from the Soapbox Poetry Club <<<

Lastly, all ages are welcome at this venue - which is ace! But we must give an adult content/language warning, and say we recommend 14yrs+ - but you know your kids so younger (accompanied) people are welcome too, at your discretion. As for explicit language, I will say that it will be used for artistic/comedic purposes, and not gratuitously.

I have been working in Poetry for over a decade and I was introduced to this kind of poetry when a chap called Scroobius Pip turned up to perform at my second ever gig in 2006, at The Great White Horse in Ipswich. At the time I was writing impenetrable and indulgent poetry. Seeing Pip literally changed my life, and ignited a life-long passion for spoken word, performance poetry, stand up poetry - whatever you want to call it. For me, its simply 'poetry that is relevant and accessible' but not afraid to tackle big subjects and to laugh at itself. This is what you can expect from every SoapBox night. A huge helping of talent, powerful think pieces, comedy, wordplay and sheer entertainment. SoapBox is a celebration of words, in all their shapes and forms. Words that everyone can relate to. I hope you love them as much as I do.

Additionally, its worth say that am always looking for local support for these shows, which will continue into 2017 (and beyond) so if you are a poet in East Anglia who would like to perform, please email me amy@getonthesoapbox.co.uk I would be utterly delighted to meet you and read/hear your work. East Anglia has a rich creative community and I am proud to promote our local poets, writers, artists and musicians.

good luck amy. jess green is amazing. i remember putting her on the night i used to co run up here before she went big. she has got bigger and better even since.

Amy, we met at Aldeburgh last year. Thanks for the heads-up on this, and best of luck - I hope the nights go really well! I have - or had - an attachment to Stowmarket; my son and daughter-in-law lived there for a number of years. Do upload all the details of all the nights on to our Gig Guide as well, for additional coverage and long-running visibiilty! Cheers, Greg