Competition closes in 24 days, 20 hours. Get details and Enter.

THE SALUTORY TALE OF RATTLIN' RAINA AND SIR ISAAC NEWTON 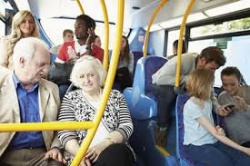 Rattling Raina (for those of you with black and white sets it rhymes with “hyena”) was a bus driver.  She usually did the Selby-Donny run.

She was called “Rattling” not because of her energies in bed but because of the ride she gave on her bus.  At Blackpool Pleasure Beach it would have cost you 40 or 50 pence these days, I bet, for such a lively equivalent.

She drove 15 yards at a time, continuously, if you get me.  If the next 15 yards was clear she’d hurtle through it, then the next and so on until she came to a 15 yard vista which was blocked by a parked car or traffic lights or something and then rammed the anchors on.

This made for excellent entertainment, particularly as old biddies got up for their stop and were treated to a practical lesson in Newton’s 1st  Law of Motion, which you no doubt will recall states that

An object at rest stays at rest and an object in motion stays in motion with the same speed and in the same direction unless acted upon by an unbalanced force.

Every schoolboy translates this as

If things don’t change they’ll stay as they are

But for these biddies whose education did not extend to 4th form Physics it had unexpected results.

Because while the bus decelerated abruptly from 40mph to nought, the biddies didn’t and would all end up as a tangled ball of grannies on the bus’s front standing step.  The cognoscenti among them however, no doubt ignorant of Newton but familiar with Raina, would sit tight until the carnage was over, the tangled ladies vertical again and the bus stationary. They’d then get up to leave.

And the reverse was equally entertaining.  Once an old biddie had got on she had a couple of seconds to find a seat before Raina hit the throttle and we lurched forward.  Forward, that is, relative to the bus stop and the rest of the universe.  Except for any unsuspecting old git who one second had been at the front of the bus but now found herself at the back – but curiously adjacent to the outside bus stop.  Newton, you see.

I lie a little when I describe the rest of us as stationary.  The stop-go character of the ride had us rocking backwards and forwards in our seats.  This made for a kind of haphazard dance as we bucked and bowed in unison.  To any pedestrian looking in it would have looked like a geriatric version of “Oops upside your head”.

Clinging on with both hands to one of the steady poles as I waited for the bus to stop on one occasion, I asked Raina if she had been a driver before she came to England.  She turned to me with a face like Rosa Klebb’s and an accent as thick as borscht and said, “Trac-Tor”.

HERE WE GO ROUND THE MULBERRY BUSH ►

John,
This one`s changed her sex - she`s on a Bootle bus now!

The depot's Lost Property Office did a roaring trade, MC, in giving back the false teeth and spectacles they collected from her bus each night.

Another priceless monologue from the master of Selby.
I recall the tales of Ramblin' Sid Rumpole - this must be
his long lost sister - bussed in from distant parts.
God bless her and all who shake with her!