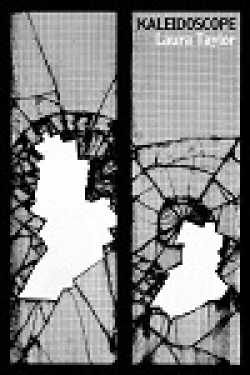 Hats off to Flapjack Press for continuing to deliver their mission to explore the synergy between performance and the page. The concept is well tested in Laura Taylor’s debut collection, Kaleidoscope.

The collection could have taken its title from any of a number of the collected poems, not least ‘Writing in Fire’. Taylor has a reputation as a ranter and thrives on presenting her more didactic pieces in the bearpits of pubs, and at festivals, rallies, and demonstrations. It is rousing stuff. However, it is far more than that and charts a personal journey that illuminates the origins of her antipathy to power and authority, the disabling power of the past and the liberating process of challenging it through shared action and personal creativity. It is about choice. The title poem ‘Kaleidoscope’ appeals to me precisely because of its openness and understatement, and its positivity. It pins itself to no particular cause, and in that sense has as much universality as Robert Frost’s ‘The Road Not Taken’.

This is a road with no name.

A road that leads to

A road without a name can lead to

How easy it would have been to add nowhere to that choice.

Laura Taylor’s signature rants are full of passion and politics but I don’t think they are her best poetry. They are scripts for performance. However, as the collection unfolds there are poems whose imagery stops you in your tracks, forcing you to re-read. Taylor has a much wider emotional range than tub-thumping anger. There are visceral lines and phrases that stick in the head like earworms or leave an unmanageable lump in the throat.

The collection illustrates her commitment to language as a tool for catharsis and change:

Loves the kick of fuck on teeth

the sibilance of pissing,

can curl a prudish lip

which will never feel the joy

of a cunt upon the tongue

or the diction of a prick

Tony Harrison could not help but feel proud of that.

Taylor pulls no punches in dissecting the oppression of the vulnerable, particularly women and children. She makes clear that people are often made vulnerable just so they can be oppressed more easily and exploited more systematically:

Not old enough to vote or wed

but old enough to be transferred

by men to men;

to be ignored, exploited:

treated with contempt and scorn

by lawmen, care and councillors

You don’t have to hear these poems out loud. They repay re-reading as Taylor moves from “in your face” didacticism to “show don’t tell” mode, as in the terrifying ‘i-museum’:

There’s a flat-chested Sindy doll in that room over there,

with shorn hair and home-made clothes.

and they mostly fight or fuck.

In the cellar there’s a well of tears,

soon to boil and dry.

There are curtains down there that are permanently closed,

so people can’t see in.

And all the implements you’d ever need

to raise weals on a small girl.

That was fun wasn’t it?

And then there’s love and something approaching forgiveness in some of the most moving yet unsentimental pieces.

I will say the words

Tiny words for you to hold,

all tissue-thin and chalk for bones.

I whisper through your hair

Along with the brutality of some of Taylor’s highly personal subject matter she allows us a glimpse of another side; her love of dictionaries, a truce with the dog next door, reconciliation with family, happier memories of childhood, new-found love. The sequence ‘The Melting of the Ice’ is a work of great beauty and significance where not a line is wasted. Her examination of the slow theatre of death and its impact on the audience who are also the players is forensic:

wraps around the chasm

of tomorrow, while our

(‘The Melting of the Ice Tableau 2: Night of Years’)

I don’t think Laura’s Taylor’s rants will convert anyone who doesn’t already think the Tories are bastards, the Queen a leech, Thatcher a monster, Blair a fraudster and all bankers bent. But she goes beyond name calling. In tracing her own awakening, “ceaselessly beating out/ rhythms and rants/battle march melodies/full in her blood” (‘Re-Radicalised’) she offers a rallying cry for unity of the oppressed, and at its most powerful an emotional call for action.

So lift your eyes from dust to sky,

and do not mourn, but organise,

and do not mourn, but organise.

She really does write in fire. This is a brave collection which shares a great deal of pain, but the light shines through and leaves this reader with a deeper appreciation of the true poetic talent of Laura Taylor.

Thanks Harry/Laura, just tried to make the words speak for themselves. I agree withJohn. It deserves a wide audience.

There should be more articles about this.

A huge Thank You to Dave - I am beyond chuffed that I can finally put all of this out into the world. It's massive fun doing the ranty stuff, but I've been wanting folk to know about the other stuff for ages now. Cheers!

Dave,
A fair and honest representation of the types of poems in Laura`s collection. (with enlightening specimens of the originals)

I like your comment that Laura has a much wider emotional range that tub thumping anger, and that she repays re- reading.