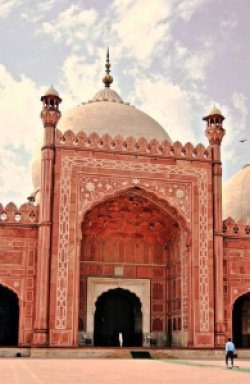 Home to the Shalimar Gardens,

A piece of pink Heaven on the bloodyearth.

Built by the Mughals to celebrate God

In its marbled, mosaic mosques:

It celebrated the Hindus and the Buddhists

Who'd moved into the future

Keeping their close hold onto the past.

It celebrated the Christians and the Jews

Who were joined to the Muslims, as brothers,

As the peoples of the book.

Not the devils of savagery, mass graves and beheadings

All the narrow cruelties of the Salafist Wahhabis

Who believe that heaven is only to be found between the pages of a closed book.

Come, come, instead and look at the Calat Alhambra

Described by the Moorish poets as a pearl set in emeralds

Built whilst, we, in Northern Europe laboured to turn a sod.

The Alameda de la Alhambra, so full of wild flowers,

Roses, oranges and myrtles. Filled with the songs

Of nightingales, the music of streams and cascades;

A very heaven built by these majestic Muslim Moors

In the late 18th century, the emergent America relied heavily on Mediterranean trade but that was fraught
with risk and danger. The captain and his charges
aboard a US merchant ship that was boarded by the
Barbary coast pirates (Morocco., Algeria, Tunis and
Tripoli - with their allegiance to the Ottoman Empire)
were held captive for 10 years. It has been estimated
that well over a million Christian captives were taken
between 1530 and 1780 by these Muslim autocracies
during raids on ships and lands beyond their own. The
UK and France were left alone because they could afford
to pay a "tribute" and it suited them to do so. The
depredations ceased when the US approved funds for a
punitive naval expedition to confront and defeat the
offending lands and their rulers during the following
decades. The line from the US Marine Corps anthem
"From the Halls of Montezuma to the shores of Tripoli"
- has the last words recalling that important victory.

Thank you Steve, M.C. and Stephanie. Wolfgar, remember what Wilde said about sarcasm. M.C. we should also remember that the Moors celebrated life with poetry and that Moorish rule was not sectarian - Al-Andalus was a place where free thinking Jewish Sephardic philosophers such as Maimonides (born in Cordova) flourished and where Muslim, Jewish and Christian scholars worked side by side in seeking to preserve the Greek heritage. This was at time when most of Christian Europe was still steeped in ignorance and superstition. The Moors also had a lively sense of humour:

When I sent you my melons, you cried out with scorn,
They ought to be heavy and wrinkled and yellow;
When I offered myself, whom those graces adorn,
You flouted, and called me an ugly old fellow.

Forcefully put. But we should consider the historical
accounts of the Moors raiding far beyond their shores to plunder and capture legions of innocents to be held as slaves in bondage - no doubt contributing
to the splendour of their palaces and gardens.
Religion is a useful tool for the unscrupulous, ready
to prey on the weak and weak-minded. The historical
conflict between "Crown and Church" nearer home serves as a reminder of its power and influence.
I propose that hate is not the preferred human choice.
Mankind is born to laugh and be happy and that shines through even in the most distressing conditions and
situations to be seen today.

An achingly accurate description of the hate filled world we live in. Beautiful words.