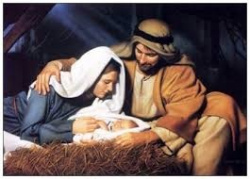 Now you’ve heard the story of the Christmas birth,

How God gave a son to the people of Earth;

Yes, you’ve heard the story of the Christ child’s birth;

Well now I add my tuppence to the tale, for what it’s worth.

You know that Mary came to Bethlehem;

They’d come for the census but again and again

The doors were closed and the inns were full so then

They sheltered in a stable; that’s all there was for them.

We know of Angel Gabriel and that awesome sight

We know of the shepherds and the star so bright;

Was a fat man called John Burgin who was with them on that night.

Cos on that Silent Night which was so wintery and wild

It was Round John Burgin with the Mother and Child.

The holy infant was so tender and mild;

His parents proud and loving; on the child they smiled;

The three of them gathered;  Round John Burgin, Mother and Child.

I DREAMT YOU WERE LITTLE AGAIN ►