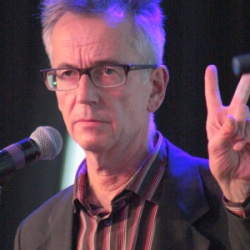 On a rainy evening in Hebden Bridge I ventured down a side street, pushed open a forbidding door and ascended the stairs of the Trades Club. Given the history of the Calder valley I half-expected to see the ghost of Edward Thompson doing a WEA gig on the rise of the English working class, but no; it was the bard of the optical devices, John Hegley.

Despite not being an optician I`ve followed his career for 30-odd years and always found him worth the ticket price.He started his set sitting down, because of an injured shoulder – yes, you figure it out - but then rose like a poetic python to wrap us in the coils of his surreal and comic imagination. We were treated to musings on John Keats and celery, Hegley`s French ancestry and the elusive charms of Luton.

A change of tone gave us a voyage round his boyhood, triggered by a boat motif on his bedroom wallpaper, which was surprisingly moving. However, as we are in the pantomime season we were then subjected to competition singing between sections of the audience — a torment that should not be inflicted on defenceless and vulnerable folk. It did however result in a woman giving a spectacularly bad impression of a guillemot. Don`t ask.

The vocal duo support act, Caitlin Stubbs and Frankie Harper, were well received, despite my initial heart-sink moment. Caitlin appeared in artfully distressed clothing and a floppy hat, often a replacement for any discernible talent. In fact, she has talent in spades. It may be due to the [ripped] genes , as she is the granddaughter of the late lamented Adrian Mitchell. Reader, I bought the CD.

Note: John Hegley gave his services for free to support a benefit night for CND. Respect!

◄ Poetry student Shirley-Anne Kennedy gets off to flying start