Poetry student Shirley-Anne Kennedy gets off to flying start 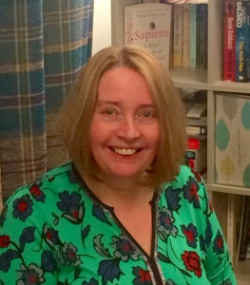 A member of the Write Out Loud team who co-hosts the Write Out Middleton open mic night has been named joint winner of a poetry competition. Shirley-Anne Kennedy, who also co-hosts the monthly Kultura poetry night in Todmorden, became a creative writing student at Bolton University this autumn.

This week she was named joint winner with research fellow Antoine Villesuzanne of Bolton University and Bolton Libraries joint poetry competition in the university category. The public category winners were John Casson and 10-year-old Isobel Richards.

Guest poet Jo Bell presented the awards at a special event in Bolton this week. The competition was judged by Evan Jones, of Bolton University, and Michael Schmidt, founder of Carcanet Press and PN Review magazine, and currently professor of poetry at Glasgow University.

Shirley-Anne said: “This is the first time I have entered this competition and I did so because of the opportunity and privilege to have a poem read by Michael Schmidt.  My poem, 'Famine Weavers' was in part inspired by Kath Reade's version of Four Loom Weaver."

My grandmother saw them gather once,

their restless particles forming in fog.

Grouped tight to keep the living out,

reflecting in mill windows and puddles.

Mee-maws hollowing into the night.

This is some of the best news I've heard all year, I'm so pleased for you, what a way to end 2015. A well deserved reward for the all out effort put into the rich mix of everything you do.

You've put Middleton open mic back on the map. See you next month at the Ringers.

Congratulations Shirley Anne,
Effectively ghostly piece, with the fog, the hissing gas-light the sound of the clogs and the silent mouthing of the mee-maws...You must be very proud.

Joe, do you remember when Lancashire mill women used to be able to talk to each other from a distance, like across a busy street, by speaking without a sound, moving their lips in an exaggerated fashion for the other person to lipread?
That's meemawing. It developed in in the cotton mills where the machines made ordinary conversation impossible. You might also remember that all the women meemawing wore headscarves, often with their curlers underneath.
Shirley-Anne, you are too young to remember this stuff, which makes your poem even more powerful in managing to evoke such images. Well done.
Joe, I remember the gaslights exaggerating the gloom on streets where I delivered morning papers, as the mill's nursery van picked up babies and toddlers so mum could go to her shift in the cardroom or on the MS2 spinning machines. Eeh! I'll go to t'foot of ar stairs.

incidentally what are me maws ??

Thank you for your lovely words, Julian.

I a deeply touched and proud to be a member of the Write Out Loud team.

You are destined for great things, Shirley-Anne. this is a delightful, clever poem. I adore the last line, which takes me back...
We are proud to be associated with you.

Thank you Joe and Write Out Loud :)

Great poem Shirley, evocative of the misty, murky cradle of the industrial revolution !! It also harks back to a time when the factories were full of workers and the 'T' word hadn't destroyed our industrial base. I can feel the atmosphere, I have pictures, real and in my mind. I remember the gas lights, just about, and my mother working in a mill, just like dad did, with fatal consequences for him !!