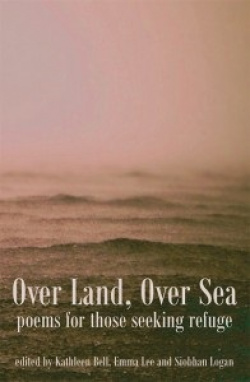 A poem that first appeared on Write Out Loud, and was prompted by the worldwide anguish at pictures of the lifeless body of Aylan Kurdi, a three-year-old Syrian boy washed up on a beach in Turkey, is appearing in an anthology of poetry in support of refugees.

Laura Taylor’s ‘For Aylan’ is included in  'Over Land, Over Sea - poems for those seeking refuge', with all proceeds from sales of the book to be shared between the charities Médecins Sans Frontières, Leicester City of Sanctuary and Nottingham Refugee Forum.

Edited by Kathleen Bell, Emma Lee and Siobhan Logan, the anthology of 102 poems expressing solidarity with refugees was put together in the East Midlands by an editorial committee, typesetter and publisher working free of charge, and the initial print costs were covered by a crowdfunding campaign.

Laura said: “It's always nice having a poem published, but it's so much more rewarding when it's published in a book where all proceeds are going towards the something that you wrote about.”

Poem-a-thon over 10 hours to raise cash for refugees ►

I've come late to this, but congratulations Laura!

Possibly. And this year I'll try not to take out several guitars, a mic stand, and the lighting ;)

Well done Laura. Missed you last Saturday in Bolton. Hope the gig went well on Sunday. Perhaps see you at WoL Wigan for the Christmas knees up.