Poet Dave Reeves, pictured, will be opening this year’s National Dialect Weekend from 16-18 October at Wednesbury, in the Black Country of the West Midlands.

The three-day celebration of English national dialects takes place each year in a different location, with  poetry, stories and live music.  The weekend is kicked off at 7pm on Friday night with entertainment in Black Country dialect including the Black Country Living Museum’s poet-in-residence, Dave Reeves; storyteller and singer Billy Spakemon; and the poet laureate of Wednesbury, Brendan Hawthorne, who is also organising the weekend.

Saturday’s events run from 10am-10pm with dialect verse competitions during the day and  entertainment from dialect writers from across the country in the evening, while Sunday winds down with a walk around Wednesbury guided by local historian Ian Bott. Brendan Hawthorne said: “The richness of language is to be celebrated. Come along - it’ll be bostin’!’

Abegail Morley is Canterbury festival's Poet of the Year ► 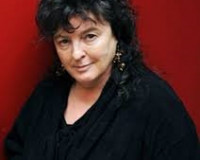