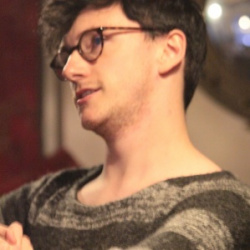 They have to move from one pub to another from time to time, but a nomadic existence does not dim the enthusiasm of PureandGoodandRight (PGR) Poetry regulars in Leamington Spa. For instance, they still talk of the evening when they relocated twice in the same night. “The venue we ended up in, the third, turned out to be one of our best, “ recalled one regular, Paul Palmer.

On the occasion that I turned up on Thursday night, they had had to shift once more – from their “regular” venue at the Royal Pug, to the snug of the nearby White Horse. It proved an ideal space to listen to open micers such as the talented Alison Graham, whose poems included the Beat-flavoured ‘Zeitgeist Blues’, and who is embarking on a prestigious creative writing course at the University of East Anglia.

Nigel Briggs contributed ‘Morning Has Broken’, about the death of a blackbird, while Christine Michael’s ‘Slug Uncle’, about a very unpleasant relative, included the ominous lines: “He’ll find you at a wedding or a wake, and get chatting …” Paul Palmer, who writes a lot of war poetry, delivered a poem about a medal, and also ‘A Sea of Hands’, a tribute to the support of friends and family before an operation.

John Watson’s striking poem about walking his border collie at a place he called ‘Kenilworth Tip’ spoke of a man and his dog “taking our time in the Warwickshire air”, while Liz Jolly’s poems included ‘Set Text’ about schooldays, and ‘Jealousy’, “her lower lip overripe from your mouth”.

Compere Jimi Sharpe, pictured, whose series of poems produced as part of a course can be found here  (refresh by clicking on the word “deal”), rounded things off with a jokey sestina about a movie pitch.

PGR Poetry will be celebrating its 10th birthday in March 2016. Guests over the years on the second Thursday of each month have included Luke Wright, Ash Dickinson, Johnny Fluffypunk, AF Harrold, and Mark Neil. It’s been compered by Sean Kelly and George Hardwick, as well as by present MC Jimi Sharpe. The crucial behind-the-scenes admin and publicity work, including sorting out the venues, has been undertaken by Sarah Duran and Kim Watson.

Kim said:  “Despite the challenges in keeping things running, such as pub closures, double bookings, etc, it has always gone ahead, except in December, even if it has meant changing venue  on the night and redirecting poets and spectators as best as we can, to keep this magical night alive. It has been fantastic to have seen guest poets early on in their performance years, who go on to do what they love for a living. The night has also inspired others to create their own open mic nights and start writing and performing their own poetry.”

Learning of some of the star names that have appeared at PGR Poetry could have been daunting when I turned up on Thursday night as guest poet to read from my pamphlet collection Trainspotters. But the audience, which included a number who were there to listen, rather than to perform themselves, was warm and welcoming. I’d lived in Leamington for a short time many years ago during a brief university spell, and had until recently retained unhappy memories of this remarkably elegant and beautiful spa town. Thank you PGR, for a great night and good conversations, and for helping to lay a ghost.