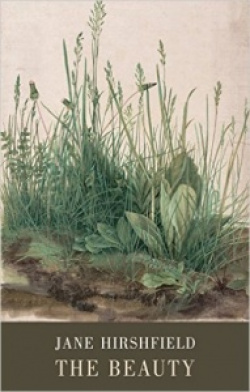 Jane Hirshfield is an American poet, essayist and translator born in New York City in 1953. She has worked widely as an academic of creative writing and poetry and received many awards, including being shortlisted for the TS Eliot prize in 2006 for After. In 2012 she was made a chancellor of the Academy of American Poets. Hirshfield, who has also translated the work of early women poets from Japanese, claims as her antecedents poetries as disparate as the Greek lyrics and Walt Whitman; as English sonnets and Chinese classical works.  The Beauty is her eighth collection.

So much for the public life. Yet for Hirshfield the domestic, the small, the quotidian, is where we can find the truths of our existence. In her twenties the poet spent several years studying Zen in California and often - although she rejects the title of Zen poet - her attention to the mysteries that lie behind the small and unremarkable, behind the ant and the teacup, call to mind Buddhist thought.

Zen or not, many of these poems examine how it is to live as a human. They look at our relationship with our bodies, and beyond that with other creatures and things. Clever and subtle, these are poems which require thought but which often go beyond thought to some ineffable truth about human existence. The first of six sections in the book is a series of poems which investigate the shadowy boundaries between our bodies, our selves and others. ‘My Skeleton’ is underpinned by the interplay of pronouns where the thinking self is ‘I’ and her skeleton is ‘you’:

What did I know of your days,

I who held you all my life

and thought they were empty?

This use of shifting perspectives runs throughout the collection: Hirshfield uses it to reflect our lives back to us, bringing the background forward so we see it as if for the first time. So in ‘How Rarely I Have Stopped to Thank the Steady Effort’:

Something happens, much does not.

Or as always, everything happens:

standing with their whole attention.

The combination of shifts in perspective and clear language rooted in the day to day means that Hirshfield can give us a fresh eye on a difficult philosophical problem. ‘Snow in April’ uses the image of an ‘awkward uncle’ comforting a baby to illustrate how what is ‘here’ and what is ‘there’ are shifting conceptions depending upon time: "Soon now, there and here,/will both move along,/a lullaby about snow falling in a snowy pasture."

Shifts in perception occur throughout life, of course, and this is also a collection about ageing and death, about roads not taken. The last section in particular contains several powerful poems about time running out, about loss, about the mysteries of memory and lasting joy. ‘Not One Moment of This a Subtraction’ depicts a deathbed scene which simultaneously mourns the loss of "your cities and memories" while celebrating "their silent handsprings" as they move off into the "daylight".

This poem also illustrates Hirshfield’s skill with an arresting metaphor, based around ordinary human life, when she describes "all the daylight coming over the sill / like a wagon / drawn by invisible big-hooved horses working hard". These are spare, clean poems, largely written in short lines and short stanzas. There is a lot of white space on the page which allows the complex themes space to breathe. The collection includes two sequences of very short poems circling around a theme and a few more expansive pieces.

This is the fourth of Hirshfield’s books that Bloodaxe has published in the UK and I was faintly horrified by the blurb on the back which pronounced that her poems "have become indispensable to many American readers in navigating their own lives". Poetry as self-help book I thought, no thanks. And yet if I am honest these poems really do help in the navigation of life; somehow they help explain it, in all its complexities and divisions and losses.

Here is ‘A Cottony Fate’ in full:

told me: avoid or.

it troubles the mind

as a held out piece of meat disturbs a dog.

Now I too am sixty.

There was no other life.