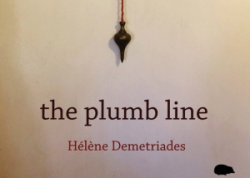 The Plumb Line by Hélène Demetriades is presented in three parts: ‘Beginnings’ in which the poet shares her troubled childhood, from the ever present “ogre” of her father, to the veritable prison of boarding school; ‘Gravity’, where the poet examines motherhood; and ‘Departures’, which deals with the death of her parents.

In ‘Weekends’, a coming of age poem set within the confines of boarding school, the isolation and loneliness of the poet as a girl is laid bare. In the opening couplet, there’s a quiet desperation that sets the reader up for what’s to come:

Weekends are supposed to be fun for children, a time of recreation and play yet here the children are “inmates in uniform”, seemingly forced on walks beyond their will. There’s palpable oppression at work throughout the poem, where even the outside world seems to be pressing in on the poet, exemplified by this regimented and controlled existence she skilfully portrays. This almost agoraphobic stanza is juxtaposed by the claustrophobic atmosphere of the stanzas that follow, where what should be comforting matinees of Sunday TV are oppressive as they “spill/against common room walls” and where “air void of family/presses against rib cages.” There’s a sense of the poet not being able to breathe in this stifling common room. And then there’s the pressing matter of the onset of womanhood, perfectly articulated in the girls’ toilets where we can literally feel the walls closing in on her:

The toilet cubicles smell of bleach,

the medicated loo paper is thin and shiny.

On it I discover the smear of my first bleed.

Unfortunately, the family home seems equally oppressive. Indeed, she has the ever present threat of her father to contend with. In the unsettling ‘My Funny Valentine’ the poet illustrates this active threat in the present tense while she’s literally being chased up the stairs by her laughing father: “I hide/behind my door frightened/your hand up my nightdress.”  And if a creepy Valentine’s card isn’t enough to further unsettle the reader, the poem fast forwards out of childhood into womanhood, where an 80-year-old father shows us this abuse is a lifelong sentence for both girl and woman. The chilling voice of her father is used here with devastating effect with its creepy and almost proud flirtatious tone: “The driver will think I’m your beau.”

In ‘Playing Dead’ we realise there’s little hope of escape from trauma for this girl as she tries to negotiate her various ‘beginnings’, whether she’s under attack from the girls at boarding school who “squeeze toothpaste into my nostrils”, or in fear of her father when she falls out of bed and she can’t be comforted by her mother in case she wakes the ogre sleeping next to her. She plays dead instead and we’re left with a disturbing final frame.

I lay on the floor

tight as a rosebud.

In the next section, ‘Gravity’, we’re in the epoch of motherhood, where threat is still present just after the poet has given birth, and dark figures loom “in spectral succession …” This suggests the poet continues to be haunted, or even that trauma from childhood bleeds into the present of her early motherhood. In ‘First Days’ the roller-coaster emotions of early motherhood are examined, where the woman is reborn as a mother into a life of “service” where “nipples crack open, weep”. When she watches her daughter sleeping “lying open to the world”, the mother is a “fish in the bedroom/gasping for words”, seemingly unable to articulate the vulnerability of her daughter in a world where fathers are sometimes ogres, and yet also managing to exemplify the bewildering joy of being reborn as a mother.

In the final section ‘Departures’ there are reckonings of a sort as the poet experiences her parents being as helpless as she once was. In ‘Familial Intimacy’ her father can’t resist a parting shot, forcing his daughter to leave his bedside: "You’re hopeless! You hiss." The irony of the title sounds out here. The poet might well have been hoping to hear something comforting as she leaned in for a moment of intimacy. Her father’s words echo on two levels: first, the insult itself, and hopeless, as in void of hope. But throughout this collection, the sheer will of the poet’s human spirit shines through, which ultimately renders her father’s insult void of all its power.

And yet, it is the woman and the girl before her, the survivor of all her childhood trauma, who has all the power in the end. Furthermore, she doesn’t abuse her position. Indeed, in the poignantly titled ‘Daddykins’ there’s real tenderness as she strokes her father’s cheeks as he lies there like a "foetal skeleton". If there is a sense of revenge or a final reckoning, it transpires as the poet transforms her dad into a proper father as she conjures him "into a loving daddy..." There’s real sadness and heartache here, despite the arguable reckoning. There’s a woman and daughter, representing the girl before her, showing her father what it means to be a better human being.

This remarkable collection is moving, devastating and occasionally packs a witty punch. Demetriades is fearless as she takes us on a journey through her life up to press, unafraid of taking us to the darkest places but ensuring still that the light will always find a way out. I love this book and can’t wait for her next one.

Corbyn and McCluskey to talk politics and poetry in Edinburgh ►