From the Boathouse to Brown's Hotel: on the trail of Dylan Thomas at Laugharne

“Eighteen straight whiskies!” The passer-by’s bemused comment to her companion on their way out of a museum that celebrates a poet was accompanied by the haunting cry of a curlew close to the Boathouse at Laugharne, once occupied by Dylan Thomas and his wife and children. Dylan lived at the Boathouse, overlooking the stunningly-beautiful Taf estuary, for his last four years before his death at the age of 39 while on a US tour, with “Eighteen straight whiskies … I think that’s the record” remembered as one of his last remarks, and regarded by some as his epitaph.

In Laugharne, which provided inspiration and material for his radio play Under Milk Wood, he and his wife Caitlin would head for Brown’s Hotel of an evening, leaving their children to fend for themselves. The Boathouse is now open to the public and administered by Carmarthenshire county council; in another time the welfare of the Thomas children might have been investigated by the county’s social services department.

In the words of one of his biographers, Andrew Lycett: “The house’s position, set tight against a red sandstone cliff, made for dampness which was not helped by the sea lapping against its lower walls at high tide. It was a haven for rats. On the other hand, not many buildings have their own private harbour at the back or an outside wooden verandah offering magnificent views over the Taf estuary.”

You can watch a 20-minute film in the Boathouse, and look at some of Dylan’s letters, most of which seem to be about money, or, more accurately, his lack of it, before sitting outside in the courtyard of the tearooms, and gazing across the estuary if the weather is fine. It certainly was when we were there. Afterwards we went for a drink, as you do, in the celebrated Brown’s Hotel as part of the pilgrimage, and found it full of pictures of Dylan and Caitlin, as well as the voices of an Irish male voice choir on their way to take part in a competition with their Welsh counterparts.

It is said that, despite his constant money worries, Dylan Thomas was at his happiest in the Boathouse. It was provided for him by a besotted benefactress, and its nearby shed became his place of work. After being installed there, having written little for the previous two years, he quickly produced ‘Over Sir John’s Hill’, with its references to hawks and herons, and ‘Poem on his birthday’: “By full tilt river and switchback sea / Where the cormorants scud, / In his house on stilts high among beaks / And palavers of birds // … Herons spire and spear.” The penultimate poem in my Collected Poems edition, ‘In the white giant’s thigh’, begins: “Through throats where many rives meet, the curlews cry”. And you wonder, how his poetry might have developed and changed, looking out on that view every day?

I visited Laugharne with my wife Gillian on our way back from a holiday in Pembrokeshire, and en route to a splendid wedding being celebrated at Rhossili on the end of the Gower peninsula, close to Dylan’s birthplace in Swansea. The ceremony took place in the Worm’s Head hotel. Dylan Thomas once walked to the end of the Worm’s Head, fell asleep and found himself cut off by the tide, and was forced to remain there from dusk to midnight.

After the wedding, we returned to our hotel, with its Dylan’s Bar and Dylan burger on the menu, on the outskirts of Swansea to find ourselves locked out. We were unable to raise anyone and had to spend an uncomfortable night trying to sleep in our car. It seemed an appropriately Dylanesque escapade, although somewhat bizarre for people of our advanced years. I thought I heard a poet laughing, somewhere. 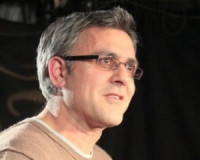 Last September my wife and myself found ourselves in a caravan a few miles round the coast in the next village. it was with great delight I discovered on the way home the boathouse at Laugharne and I realised why D.T. would want to be there. It is a fabulous place. For a great poet. It not only made my day but my month. I felt an inner glow for many days afterwards. And to think I almost missed it!

For those appreciative of fine Welsh scenery, there is a
petition at www.change.org against the proposed
closure of the footpath/cycleway at Barmouth - forcing
an 18 mile detour and the loss of a wonderful vista to
travellers of a slower tempo. I'm sure the poet would have
been active against this shortsighted local council decision.

I've been to Dylan's boathouse a number of times. A lovely place and very friendly too . .

Very evocative Greg. There's something enchanting yet bizarre about Wales which I think DT captured in a many ways. I remember one New Years Eve in Swansea, when we left our party in a downstairs flat in Bryn Terrace, to go and listen to the boats/ships sounding their klaxons in the bay, to welcome in the New Year. Only to find that the landlady who lived upstairs had come down and bolted the front door. I think we got back in through a dodgy window in the kitchen. ( we were young and agile then, and used to breaking into student accommodation).

Many thanks for your comments, chaps. Graham, you may be assured that a version of the postscript to this story will be appearing on Trip Advisor in due course. Trev, the intro has got me wondering about my own record for straight rums at a certain pub in Clerkenwell, every second Monday in the month ...

I was once told by a friend in LLanelli that DT also used to try to catch fish from the Worm's Head by 'tickling' them.

Give that one a try next visit?

Only you Greg! Having read that beguiling account of DT and his final years in such a lovely location, you leave us with a picture of you and Mrs F tossing and tumbling in the back of your car. Not many of us would go that extra mile to relive the 60's!!

A great read, well done and thanks for sharing.