Afghan women writing in secret, and Iraqi, Syrian and Kurdish poets on the front line 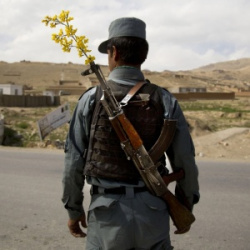 Afghan women who gather in secret in recite and write poems of war, grief, separation, and love, and Iraqi, Syrian and Kurdistani poets offering dispatches from the front line are just some of the highlights of the Southbank Centre’s Poetry international later this month. Events include Poets on the Front Line, with poets Choman Hardi (from Iraqi Kurdistan) and Ghareeb Iskander (from Iraq) reunited with UK-based Jamaican poet and Forward prize winner Kei Miller, who visited the Kurdistani capital Erbil for last year's literary festival. Together, they discuss the challenges of capturing conflict in verse, on Friday 24 July, at 7.45pm.

On Saturday 25 July, from 12 noon-4.15pm, there are three Poetry in Conflict talks. In Modern War Poetry, 12- 1.15pm, voices from outside the US and UK describe their experiences of conflict, including Syrian Kurdish poet Golan Haji and Iraqi poet Adnan al-Sayegh, whose criticism of oppression and injustice has led to his being sentenced to death and forced into exile. The talk is chaired by Harriett Gilbert and presented in partnership with English PEN.

Why Afghan Women Risk Their Lives to Write Poetry, 1.30-2.45pm, brings together Afghan poets Shkola Zadran and Mina Ibrahim Khil, Sahera Sharif, founder of the Mirman Baheer literary society in Kabul, and award-winning poet and investigative journalist Eliza Griswold, who shared their work and story in the New York Times.

Free of the Taliban, 3-4.15pm, tells how over five centuries, poets in remote north-western Pakistan have recited verses about the area's mountainous scenery, tribal culture and love. After the 9/11 attacks, the Taliban and their allies ordered the poets to compose jihadist messages of war, brutality and conformity. Military attacks on the Islamists have displaced more than 700,000 Pakistanis from the North Waziristan region, including around 50 poets. Amid the chaos of refugee life, they are restoring tradition to their verses. Three of the poets, Saleem Khan, Zahid Ullah Khan and Dilawar Khan, will eb at the Southbank, plus the journalist Aamir Iqbal, who first brought their story to light.

On Saturday 25 July, at 7pm, in Scorched Glass, leading Iranian and UK poets come together to read poems from Modern Poetry in Translation magazine. Stephen Watts reads work by Ziba Karbassi, Esmail Khoi and Reza Baraheni, and other guests include Paul Batchelor, Karen McCarthy Woolf and Pascale Petit, all of whom have been involved in a project to translate modern Iranian poetry. London-based Iranian poet Ziba Karbassi also joins to read her work, which has been compared to the poetry of Marina Tsvetaeva. Karbassi gained attention with her poem ‘Sangsar’, (‘Death By Stoning’), written in her early twenties.

On Sunday 26 July, 3.30-5.30pm, I was Your Daughter: Poetry in Her Name, a free event in the Clore Ballroom, features the Mirman Baheer literary society, a group of Afghan women poets based in Kabul. Rural members of the group often write in secret, presenting their poems anonymously in fear of what exposure could lead to. I Was Your Daughter honours the bravery of these poets using landays, an Afghan form of spoken word that allows poems to travel freely between writers and communities.Award-winning poet and investigative journalist Eliza Griswold will be joined by poets Mina Ibrahim Khil, Shkola Zadran, Jasmine Cooray, and Rafeef Ziadah, director of the Mirman Baheer literary society Sahera Sharif, and a group of emerging poets to give readings. There will also be a showing of Seamus Murphy’s poetic documentary film Snake, made as he and Eliza Griswold searched for landays across Afghanistan.

Reach for the sky at Write Out Loud Marsden tonight ►