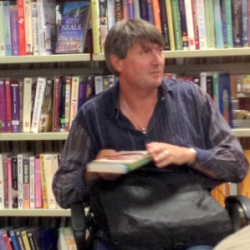 Simon Armitage has won the contest to become the next Oxford professor of poetry, a post second only in prestige to that of poet laureate. Carol Ann Duffy, the poet laureate, was said by the Guardian to have welcomed the announcement, calling Armitage “a fine, vocational poet and a brilliant communicator for the modern age who never forgets the roots and ancestry of poetry. Oxford is lucky to have gained his time and commitment to this post and should prepare itself to be shook, rattled and rolled,” she said.

Armitage himself told the Guardian that he was “delighted and very excited and suitably daunted as well. It’s been such a long process. In the time it’s taken we’ve had a general election, Sepp Blatter has come and gone and come again, and we’ve nearly got a new leader of the Labour party.”

He said he would try to give students an insight into “what is occasionally quite a muddy world, and a muddy art form, remembering that the audience are primarily students, and not to see it as a platform for professorial grandstanding. For me, it’s a chance to say something a little bit more contemporary. Often it’s been professors talking about previous generations. I feel as if I’d like to bring things up to date. To look at poetry today, in dialogue with the poetry of the past.”

In a statement that he provided before the election, the poet and translator of Sir Gawain and the Green Knight said he would be “greatly excited and deeply honoured” if Oxford graduates “saw fit to appoint a self-schooled poet who views poetry from a hill above a Yorkshire village”. In a recent profile article in the Guardian, Marsden-born Armitage, who still lives in West Yorkshire's Colne valley, near Huddersfield, said dialect and deliberately northern inflections were central to both the music and the politics of his poetry. “We live in a world where as soon as you open your mouth you are pretty much nailed. [People] know you not just horizontally and cartographically, they know you vertically as well, where you stand in the class structure, what your parents did, where you went to school. And I think writers are very aware of that and play with it.”

Armitage beat Nigerian playwright and poet Wole Soyinka, American poet AE Stallings, Ian Gregson and Seán Haldane to win the election, polling 1,221 of the 3,340 votes that were cast by graduates. Soyinka was second with 920 votes and third was AE Stallings with 918.The post brings a £12,000 a year salary and requires the incumbent to present three lectures at Oxford.

Among Armitage's supporters was writer Melvyn Bragg. Bragg had previously supported Soyinka, but later publicly switched his allegiance to Armitage, telling the Sunday Times of his concerns that the 80-year-old might not “bother to come to Oxford” if he were to win. Soyinka replied: “How curious that anyone would even speculate that I would allow busy and committed people – friends, colleagues and total strangers – to waste their time nominating and campaigning on my behalf for such a prestigious position if I were not serious about contesting.” Soyinka initially led the way with the most nominations in the early stage of the election.

Sir Geoffrey Hill is the current incumbent, and will step down at the end of this academic term.

'Giving something back to the landscape, whether it wanted it or not' - Simon Armitage on the Stanza Stones ►

I look on it as another poetry triumph for Marsden. But here's another point of view http://www.partisanmagazine.com/the-algonquin/2015/7/2/wheres-the-weird

He is far more credible than Duffy - a PC checkbox choice, if ever there was one.

Yippee indeed, Cynthia. I was set against Mr A for quite a while because of his (then) stated antipathy to the idea of 'performing' a poem.
It would be incorrect to equate modernising with performance. Yeats saw poetry as "an elaboration of the rhythms of common speech and their association with profound feeling", and I think Armitage is keen to speak plainly to his listener/reader, and alert to the intimacy of that relationship. He is fully aware of poetry's oral provenance, as all poets should be. "Mere air these words, but delicious to hear" Sappho.
His reading in Washington, that I was lucky enough to witness and report on, was a masterclass in how to present your work clearly without in the least dumbing down.

Your wording presents a false dichotomy Huw. The role is not limited by such a binary demand.

Forgetting which. I think this a good appointment. Armitage to be clear is NOT simply a performance poet. He is a poet of the page and a poet who reads and performs his poetry. He writes in free verse, he writes with structure, both self created and traditional. He writes in rhyme and with rhyming schemes and he writes without both. He is both modern and simultaneously and paradoxically in keeping with past traditions.

His lectures, thoughts and and direction will be very interesting imo.

I am really not sure and more than a little concerned about this appointment. I suppose the title phrase "bring things up to date" is part of my disquiet.

If Armitage sees his raison d'etre to be a modernizer he could do more damage than good.

He is obviously a popular choice (the parallel with CAD's appointment as poet laureate does not go unnoticed) and will clearly try to embed the current X-factor profile of performance poetry into the bosom of academia.

The problem I have is with his most likely legacy. In my opinion CAD has done little to justify her (popular) Laureate appointment and SA's smacks of something similar.

Armitage is undoubtedly a talented performer but in the big chair of one of our most prestigious establishments, I fear for his future credibility.