Competition closes in 14 days, 1 hour. Get details and Enter. 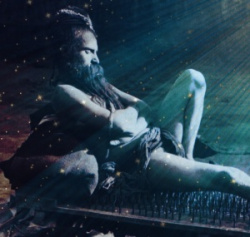 as he sat on the comfy settee.

“Its your father”, she replied as the dishes she dried,

“By singing a song?” he asked with a grin

as he as he looked for the TV remote.

“He says that he’s chanting” she replied with a smirk,

“Is he gonna be long?” Johnny asked with a sigh,

“I wanted to watch the telly?”

“He shouldn’t be love” she replied with a shrug,

“do you want some ice cream and jelly?”

So desert in their hands and a hum in their ears,

they chatted and patiently waited

for the noise to die down and the snoring to start,

which meant dad was happily sated.

“Is he losing his marbles?” Johnny asked all concerned

for he worried about his old dad.

“You can’t lose what you never had”.

They giggled a while and with a cheeky smile

Johnny said to his mum, “He’s a star”

“He’s certainly something from outer space,

if  a star then he wants bloody shooting”.

Desert came and went and the distant hum

of his dad slowly faded away.

Then after a pause came a thunderous noise

that made them both jump out the way.

“Its sounds like he’s done” chuckled mum to her son

who was looking quite pale in the cheeks.

“Put the telly on, love, I know that snore,

your dad could be out for weeks”.

◄ THE BALLAD OF BOB THE BUN

Thanks Lea. The only reward I look for is a smile. Keep Smiling

Hi Darren, I'm really enjoying reading your poems, always bring a smile to my face, as does your great profile pic, lovely x