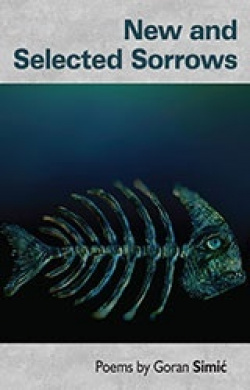 Goran Simic is a name you may well have heard of.  Some of his work has been translated by this year’s TS Eliot prize winner, David Harsent.  He was born in 1954 in Sarajevo, 40 years after that famous Sarajevo “launch” of the war to end all wars. He is widely published and translated and, like many practising poets, is also a university teacher.

The war that forms the central theme of this selection is the Bosnian war of the mid-1990s. After the war Simic relocated to Canada under the sponsorship of PEN. Details are sketchy from my Google trawl but he seems to have worked as a labourer before finding employment as a writer in residence. He has returned at least partially to his home country in recent times. However, his years as a refugee animate the later work in this collection. Simic’s Bosnian war was a civil war, a war between neighbours, and the horrific, domestic intimacy of death and destruction give much of the texture and the weight in these poems.

I would find it hard to locate Simic’s political sympathy or ethnic origin - he is a Bosnian Serb, apparently. The poems are about the little guy caught up in the travails of history

I’ve met many people and they all resembled me

Some hid in bodies already used as corpses.

The war in Bosnia was not one where a fighter goes to a foreign field. Simic’s war is intimate, taking place in the homes, the street, the bus, the train, the airplane. We see a society splitting into its component elements, and citizens asking  themselves, and being asked, about their identity.

He returned my face

That had been sitting in the police files for years

My smile from the time when I believed

That wisdom was as big as a travel bag.

There is also an all-encompassing fear of change in identity, in a new political reality:

To become one of the faces on a family photograph

This fear of creeping alienation becomes even more real in the later part of the book when Simic addresses issues of asylum seeking and emigration. In one of the finest poems in the collection he meditates upon how trees have been affected by the war. He thinks about the forest where his grandfather took him walking, and of a particular  tree:

In the bark of an oak bullets glitter like a constellation

made by somebody learning

how to handle a gun.

I cannot claim that Simic is always sure-footed in these explorations. His lyrical effusions  (arguably something shared with Wilfred Owen – remember the blood, dirt and sucked sugar stick?) carry a recurring risk of whimsicality.

I no longer care to hide in my pocket

fingers red with the pain

of turning the radio dial all night

looking for a programme that plays silence.

That’s an appallingly manufactured dial and I could in a trice find him a programme that plays silence. What stops this problem being too pervasive and where Simic is strongest is where his eye rests on queer quiddity of observed reality.

The rustle of job-offer fliers stapled to the street poles.

In the personal and highly impressive poem ‘Christmas Tree Decorations’ he exercises a telling restraint. Each of the stanzas ends with a hanging and potent line. It is a poem about the legacy of war and the ambivalent hope of peace. From another fine poem, ‘Father and Bees’:

I’ve heard that the stench of rotting corpses

Buried at the soccer field overpowers the smell of linden.

There is something about the matter of fact recitation of numbers colliding with the sensuous smell of the linden trees (or its absence).

As the book proceeds we see Simic meditating on his translation to a new culture and a new society. He looks back not just on the war but all of the wars of the 20th century and the impact they had at the level of the family. It culminates in the ‘Mathematics of Genocide’ which as in the previous poem tenses hard data against raw emotion.

The final poem in the book is a sequence,  ‘Wind in the Straight Jacket ’, which is less successful and I wonder if that is due to distance – psychological as much as physical, from the observation of war-torn reality. There is a sense of the poet ill at ease in the new dispensation, still trying to make some sense of it all.

Then I went home

to sit at the kitchen table and write

the poem about blood and sweat

about bruises that only I feel,

the poem in which I give thanks to no one.

This is a collection with a number of wonderful achievements in it.   My hesitation is really about the language. It is not clear whether the poems are written in Serbo-Croat and translated or written in English by someone whose English is not his strongest language.   There is often imprecision and generalisation where you would want accuracy. Sentence structure can be rhythmless, as in this from  ‘The wall of horror’,  where we get a cannonade of prepositions:

she looks at her big stomach as at a wall behind

which moves a being nailed to the womb by

drunk soldiers in a camp on the other side of the

Simic is an essential chronicler of a conflict which besmirched the 1990s in Europe, and in doing so he exposes, credibly and feelingly, the cost of all war.

◄ Young voices of the Mouthy Poets in Doncaster on Saturday

Excellent review
I have spent a lot of time in Bosnia