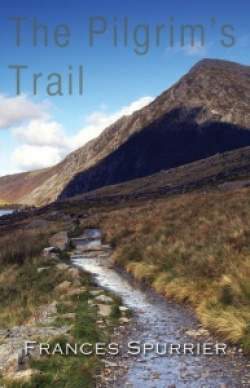 This is a book about time and memory, about the slippages between our days and hours. It is about how nature goes on, even though we can’t, about the long collective memory we humans share which is called religion, or myth, or folklore. It is also written by Frances Spurrier, the reviews editor of this very website, so you will forgive me if I don’t take a hatchet to her treasured offspring. Not that I need to, of course: there is much to admire in The Pilgrim’s Trail, as the Cinnamon Press recognised when it awarded many of the poems that make up this book first prize in its Collection competition.

As well as being reviews editor for Write Out Loud, Spurrier achieved a distinction in the MFA in creative writing at Kingston University. She has also taught creative writing. Spurrier grew up in south Wales but now lives in London with her family. The Pilgrim’s Trail is her first collection.

The collection begins with an epigraph from Walt Whitman, concluding with the line “Long has the globe been rolling round”, and the implacable turn of years and how that intersects with identity is a key concern for Spurrier. The Pilgrim’s Trail opens with a poem in the voice of the first humans, ‘Radiocarbon dating’, who seek to comfort us, their descendants, with the words: “We have left writings for you/drawn with a stick/in the dust of our souls’ leavings.” The act of writing for Spurrier is a way of holding back or subverting the erasures of time. So in ‘Patricio’ memories are “the ley lines of lean years/scratched in tumbling scree” and in the title poem ‘The Pilgrim’s Trail’, “the ground is covered in signatures”.

Many of these poems go back to something primeval, beyond the natural world even, to geology, and examine how that interacts with human life. ‘Aberfan’ replays the disaster of 1966 when a colliery spoil tip in the Welsh town collapsed on a school, killing 116 children and 28 adults. “Nothing in the song-books/told us the landscape could one day fold up/slip away,” the poem records. In ‘The Golem of Old Prague’ Spurrier uses the legend of a primordial creature, summoned from river mud by a Rabbi to protect the Jewish community against anti-Semitic attacks, to hint at the often horrific history of Jews in Europe: “Behind him lie, twelve deep, the dead of Bohemia and Moravia.”

This poem also illustrates the poet’s willingness to mine the stories and imagery of Christianity, Judaism and, further back, Greek mythology, to examine our shared memories. This varied mix of references extends to the geographical reach of the poems, which centre on Wales but roam further afield to London, Scotland, Italy, Greece and more. This is a collection which represents the modern history of Europe as a place of war and intersecting histories and cultures.

Perhaps the most moving poem in the book is ‘Hilchenbach, 1936’. Dedicated to the poet’s father this is a poem about the darkest period in recent European history, about living in exile, the impossibility of ever moving on from the Holocaust, about survivor’s guilt. A near sonnet, it has a perfect turn at the stanza break, moving from the ignorance of the present to the all-encompassing knowledge that will haunt the addressee’s entire future: “All your life you will stand on a platform/knowing the past can have no other trace.”

This near sonnet is unusual in the collection, however, which is largely written in free verse without rhyme. The success of ‘Hilchenbach, 1936’ made me wonder if Spurrier should consider writing in form more often, for the rigour it places on poems. Occasionally there are poems here where the line endings seem a little random (“while the deluge poured/in with hilarity”) or where the grammar slips (“He must not be curious, and yet, he is:/He should not distinguish, and yet he does.”). But to put too much emphasis on these slight flaws would be to miss the poet’s skill at turning phrases and creating images. So in ‘Love of a sort’: “From my chair I listen to the rooks/sing their way down river/they count the years of our parting.”

Spurrier references Dickinson and Keats but in many ways her work is closer to that of Eavan Boland in its exploration of both the Welsh mountains – to Boland’s Ireland – and, further in the distance, the wastes of European history. Burnside also comes to mind, with his close reading of landscape, and Heaney for his mythic reach. There are several poems in this collection that refer to the immense impact climate change is likely to have on all of us. In a time of flux and uncertainty it is important to have a poet like Spurrier to reflect on our stories and where we find ourselves in the world.

Thank you for this Cato. It certainly makes me keen to get my hands on this collection.