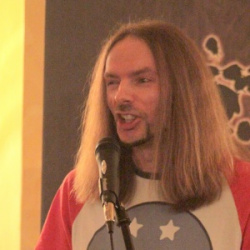 Spoken word star Ash Dickinson is the headline act at the first fundraising event organised by poets, musicians and visual artists in York who have banded together to form Arts Against Homelessness, aimed at confronting growing problems of homelessness and poverty in their neighbourhood.

The fundraising cabaret night at The Basement, City Screen, York on Monday 23 March will also feature performances from local poets and musicians.

Arts Against Homelessness is the brainchild of three local creative arts groups: long-running poetry and storytelling night The Speakers’ Corner, independent publishers Stairwell Books, and poetry slam organisers Say Owt!. Their goal is to pool the talents of York’s creative community to raise funds for local charities and increase awareness of the problems faced by the most vulnerable members of society.

York poet and Arts Against Homelessness organiser Andy Humphrey said: “A low-wage economy, benefit sanctions and the bedroom tax have left many of the poorest households in our city unable to afford their rent. Local authority funding and legal aid have been cut, and people can no longer rely on the state to support them through difficult times. It’s left to charities to pick up the pieces.”

“The work that our nominated charities do is very much under the radar,” says Andy. “Most York residents don’t know that these organisations exist, unless they fall on hard times and need to turn to one of them for support. That makes it difficult for the charities to fundraise, or to secure grants to expand the services they offer.”

The first fundraising night has been made possible thanks to the support of York literature festival. Tickets cost £5 and can be purchased on the door, by phone (0871 902 5726) or via the City Screen website. Proceeds from the event will go to the group’s nominated charities.