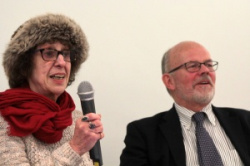 Elaine Feinstein may now be 84, but “work is my game. It’s how I play”, as she says in the concluding poem, ‘Death and the Lemon Tree’, in her latest collection, Portaits, a series of acute, lively vignettes about people she has known and/or admired. In an entertaining and absorbing reading and conversation with her publisher, Carcanet’s Michael Schmidt, at London’s Jewish Museum on Tuesday, the poet, novelist and biographer talked of her connections with Russian poets; the “outsider” poet Isaac Rosenberg, who died in the trenches; the suicide and Holocaust imagery of Sylvia Plath; and the lingering anti-Semitism of TS Eliot.

In an event that was part of Jewish Book Week, the conversation, rich in literary observations and anecdotes, kept coming back to Plath. Feinstein read her poem ‘The Gamble’, about Plath’s death in “the unnatural freeze of ‘63’, and introduced it by wondering aloud just how much she really meant to kill herself: “An au pair was coming that morning, only accidentally she couldn’t get in.” She also mentioned that Plath left a note with her doctor’s phone number on it.  Feinstein, the biographer of Plath’s estranged husband, Ted Hughes, asks in her poem: “Was hatred / cleaner, did you prefer to damage him / when he saw your healthy body dead?”

Michael Schmidt asked Feinstein how she felt about Plath’s use of Holocaust imagery in poems like ‘Lady Lazarus’. Feinstein said that they were present in Plath’s writing partly because of her “German origin, her close relationship with her father”, and added that in the early 1960s “we were all haunted" by the Adolf Eichmann trial in Israel. However, in response to a later question, she conceded that Plath had turned the Holocaust into “a fairground” in her poetry: “It is deeply transgressive.”

Feinstein read another poem ‘April Fools’ Day’, from her new collection, about the poet Isaac Rosenberg, who died in the first world war trenches on 1 April 1918. Another life cut short: “His was the life half lived, if even that.”  She spoke of his outsider status – “All he had was talent, genius” – and the poem adds: “His fellow soldiers always found him odd. / Outsiders do not easily make friends, / if they are awkward – with a foreign God.”

‘Life Class: A Sketch’ is about another outsider, the Caribbean-born novelist and short story writer Jean Rhys, “one of those novelists who is always being rediscovered”. Feinstein observed: “Most of her life, looked at from the outside, was a disaster.” But Rhys, she said, used the disasters in her novels. She said that she met Rhys late in the novelist’s life, when she was in her 70s. The poem has her around that time, “in a Knightsbridge hotel, / elegant … to meet her fame”, but mourning that it was all too late, “without irony”.

Feinstein’s poem, ‘Emanuel’, in memory of Emanuel Litvinoff, who died in 2011, refers obliquely to a famous literary moment, when Litvinoff read a poem criticising TS Eliot for his anti-Semitism, at an inaugural poetry reading for the Institute of Contemporary Arts in 1951. Litvinoff was moved to write ‘To TS Eliot’ on finding that Eliot had republished lines he had written in the 1920s about “money in furs” and “ slime” and a Jewish man’s "lustreless, protrusive eye" only a few years after the Holocaust, in his Selected Poems of 1948. Eliot was in the audience.

Feinstein began her reading by talking of her connections with Russia, which had been “exotic and fortunate, and very much a matter of happenstance”. Her translations of Marina Tsvetaeva, a Russian and Soviet poet who killed herself in 1941, shortly after her husband was executed, were published in the early 1970s, and she met the poet Bella Akhmadulina through the “Queen of Moscow” ‘s then-husband, Yevgeny Yevtushenko. Feinstein told her audience that Bella, who lived in a flat above the Bolshoi in those days, was “very bold, genuinely courageous”, writing many letters in support of other dissidents at a time when it was quite dangerous to do so. Her poem in Portraits, ‘Courting Danger’, pays tribute to her: “You’d spent / your life flirting with Soviet danger … / mostly you avoided punishment, / and lived flamboyantly as Queen of Moscow.”

As a postscript at the end of the reading, Feinstein could not resist returning to the subject of Sylvia Plath one more time. Referring to the poet’s comparatively comfortable living conditions in the west, at least as far as state surveillance, prosecution and imprisonment were concerned, she said: “In Russia, no one could understand why she killed herself.”

Portraits is a collection that bristles with energy, and contains poems about Louis Armstrong, Bessie Smith, Billie Holiday, Edith Piaf, Fagin, Disraeli, Siegfried Sassoon, and Feinstein’s Polish cleaner, to name but a few others. It concludes with a separate, longer poem, ‘Death and the Lemon Tree’, in which Feinstein faces up to approaching mortality, then returns from a reading trip in crisis-hit Greece to find an apparently dying plant has produced new leaves in her absence. “So, you’re not finished yet, / my resilient tree. Good. Let us age further.”

I know you were sorry to have missed this reading, Frances. I've since discovered that Elaine Feinstein was interviewed the next day on Woman's Hour, and have added the link above. I will be amazed if 'Portraits' does not end up on the next TS Eliot Prize shortlist. Greg

Amazing lady, amazing life. Thanks Greg. This is a fascinating article.