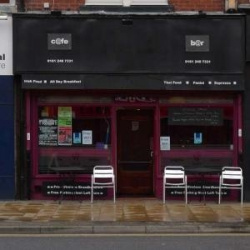 Hard Rain is a regular free poetry workshop and reading evening that goes from strength to strength at the Thairish Cafe  (formerly Isis) in Levenshulme, on the Manchester-Stockport border.

Held on the last Monday of each month, the workshops are  guided by  the accomplished poet and teacher Shamshad Khan and often feature a guest reader/writer. This week the group mused on the topic of dreams and surrealism.

About a dozen poets were at the 6-8pm workshop, sitting around wooden tables in the warm and welcoming café, enjoying bowls of oranges and dates in flickering candlelight. They discussed the topic, shared their thoughts, did some writing and singing and then joined in the 8-10pm open mic session with other poets who arrived later.

It was a fine mix of creativity, generosity, curiosity and sharing, including a trance-like interpretation of the Eagles’ Hotel California, short and long-form poems, humour, rapping, a capella singing and a hilarious and clever piece inspired by Spamalot channelled through Edward Lear and Lewis Carroll.

Several writers used poetry to expand on the meaning of their dreams in general or dwelt on specific experiences. Others mused on that half-state of being nearly awake/almost asleep. One poem dwelt on the many characters of the numeral 9.

Another tackled learning disabilities and bullying. Insomnia cropped up - do we dream also in that frustrating state of exhausted wakefulness? “In the kingdom of the sleepless/The dreaming man is king.”

Some poets focused on real-life nightmares, including the recent slaughter of students in a Peshawar school and memories of the divisions brought about by the Berlin Wall.

People are encouraged to ask questions and discuss the words and ideas – a couple of readers were invited to repeat their pieces as the audience absorbed more complex themes. A  truly welcoming event for your diary. Next month’s topic is mental health and well-being. The workshop starts at 6pm, open mic is from 8pm.

◄ Spoken word comes of age: top performance poets have night in the spotlight at the Southbank