Spoken word comes of age: top performance poets have night in the spotlight at the Southbank

Performance poetry’s equivalent of the TS Eliots – a number of contenders for a big cash award lined up in front of a Southbank audience -  took place in the Purcell Room on Wednesday night. Like the TS Eliots, we were told that the winner would be announced in the next 24 hours.

But there the similarity ended. The compere, and one of the judges, Mark Grist, gave the sell-out, enthusiastic audience – predominantly young, and some very young – a crash course in applause levels, from the disapproving cough, the confused (“Has he actually finished the poem?”), the “hearty, good shot, cricket” kind of clapping, through to cheering, whooping, and even the “poetry gasp”.

The five leading spoken word performers – Hollie McNish, Ross Sutherland, Jemima Foxtrot, Sabrina Mahfouz, and Rob Auton -  were hoping to win £10,000 from the Arts Foundation, money aimed at helping them take their work “to the next level”, at a night co-produced by the Southbank Centre, in association with the spoken word organisation Apples and Snakes.

This is a big deal for spoken word as a genre, and the first time the Arts Foundation has allocated it an award since 2006. As it says on its website:  “The scene has changed a lot for spoken word artists since 2006 when the Arts Foundation awarded the first substantial award ever in this field. With the advent of YouTube suddenly the performances could be disseminated and documented … Its increase in popularity has been mirrored on the live scene with spoken word nights being the rule rather than the exception in most cities and towns across the UK.”

As Grist said, an “exciting time”. He added: “This is a celebration, not a competition – the decision has already been made.”

Could the performers match the big build-up? First up was Hollie McNish, queen of YouTube, who told the audience: “It’s really lovely to be here. It’s really lovely to get out of the house, ‘cos I don’t do that much.” She delivered her realistic but affirmative verse with a big smile, with celebratory poems about her grandmas, always wise and full of surprises, about going weak at the knees at the sound of spoken words in French, and about pregnancy. A chap sitting near me found the pregnancy ones particularly hilarious. Her poetry is about real life: “I’ve always written my diaries as poems, since I was about seven.” She concluded with a short but poignant, anti-war poem called ‘Cherry Pie’, the title poem of a collection due out from Burnng Eye later this year.

Next was Ross Sutherland, giving us small extracts from his touring show, Standby for Tape Back-Up, about discovering an old videotape in the loft two years ago, after the death of his granddad. On the tape were things they had watched together - one-and-a-half films, one quiz show and two sitcoms – which in the show somehow becomes the story of his life. The Southbank extracts focused on Bill Murray in Ghostbusters, and Will Smith in The Fresh Prince of Bel-Air, projected on the screen behind, and grew stronger in poetic narrative and rhythm as Sutherland went on.

Jemima Foxtrot was a revelation. Compere Grist introduced her as “new to the scene, but already causing a huge stir” - not MC’s hyperbole, in my view. Her poetry is sharp and intelligent, delivered with confident, dramatic timing, and interspersed with song, such as ‘Bog Eye Man’ , with an English folk air, and another when she sounded like Janis Joplin.

Sabrina Mahfouz began with a clever, satirical poem that reflected her anger at the clampdown on freedom of expression and the jailing of journalists since 2011 in Egypt. There was a tough poem from her Edinburgh show ‘Chef’,  that featured guns, fists and knives, as well as sex and need. There was poetry written about the time that she worked as a waitress in strip clubs, and she concluded with ‘Give Us Our Bodies Back’, which she had read on BBC radio’s Woman’s Hour earlier that day. Her poems were also flavoured  with a brilliant variety of accents. Mahfouz thanked the Arts Foundation for encouraging spoken word: “Awards give artists that freedom of expression to do work that would otherwise be impossible.”

Bringing the evening to an undoubted climax was Rob Auton, a mix of deadpan stand-up comedian, theatre performer and poet, as well as co-host of the famous Bang Said The Gun spoken word night. He puts you on the back foot from the start: “Ladies and gentlemen! These are the names we give to the toilets.” He turns a Sun-like newspaper into something called The Sky, “more views than news”, and finished with an epic poem about trying to reach the moon, with stirring, heroic music, that was very funny, and very moving. With Auton, you’re pretty sure it’s all meant to be ironic. On the other hand, you’re never absolutely sure.

During the evening there were also a surprising number of positive references to grandparents, which was heartwarming. Mark Grist as compere was excellent value, too, getting the audience in the right mood with poems that extolled the delights of Peterborough, as well as ladies with learning (‘I want a girl who reads’). He was also quick on his feet, making some adjustments to an intro about Byron’s sex life when he noticed some youngsters in the front row.

And his cricket analogy, connecting a good shot to a certain kind of applause, stayed with me, too - and had me comparing page poetry to Test cricket, and performance poetry to limited overs or Twenty 20 games, which tend to draw different and bigger crowds, and are regarded by many as more fun. Both forms have their fans. And there is room for both, of course. 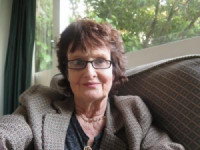