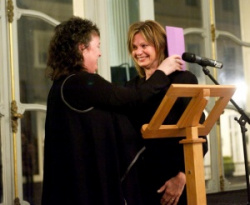 Earlier this year Maggie Sawkins won the Ted Hughes award for innovation, with Zones of Avoidance, a poetic account of a daughter’s addiction that is also an ambitious multimedia presentation using film, voices and sound. Sawkins, a teacher and the organiser of the long-running Tongues&Grooves poetry and music night in Portsmouth, talks to Greg Freeman about teasing out the story’s “terrible beauty”; the “affirming” feedback she has received after each performance; and the difficulty she has had in persuading some theatres and festivals to include Zones of Avoidance in their programmes.

What were your feelings on winning the Ted Hughes award?

While I was working on Zones of Avoidance the Ted Hughes award didn’t enter my mind. So being nominated, and then experiencing all the stages on the way to winning, was amazing.  It took quite a while for me to float back into my shoes!  Poetry’s been a part of my life from a young age, so it’s magical to see my devotion paid off. Of course it wouldn’t have been possible without the vision of playwright and director, Mark Hewitt. I’m thankful to him for having faith in my story.

How has this year turned out for you since then?

It’s been an interesting year. It was marvellous to see Neil Astley in the audience when the lights went up at Ledbury; Cinnamon Press are publishing my next collection which includes the script of Zones of Avoidance; I recently gave a keynote speech on poetry and resilience at a mental health conference; I’ve become a mentor for the excellent Girls’ Network in Portsmouth; and I’ve just been invited to read at the London launch of Butcher’s Dog!

Has the success of Zones of Avoidance changed you?

Well, I’m carrying on as normal - teaching, organising events for Tongues&Grooves, writing poems, walking my dog. The difference is I do all these things with a little glow in my heart.

How did the making of Zones of Avoidance come about? How personal is the story? How long did it take to put together? Was making it traumatic, cathartic - or both?

The story is very personal.  I’d been gathering draft material on the subject over a period of 20 years. Much of it was in the form of diary entries and some was in the form of unsent letters to my grandson, who’s been estranged from my daughter since the age of three. My motivation was to keep a record for him – when someone close to you is gripped by addiction you’re always expecting the knock on the door. I could have written the story as a memoir and perhaps made a lot of money. However, reading back through the drafts, I realised that the ‘truth’ could be told in relatively few words. I think all of us have the one tale to tell and there are different ways of telling it. Writing in poetry enabled me to tease out the terrible beauty from what, in reality, has been a much darker story.

You have taken the show to places like Ledbury poetry festival. What kind of feedback have you had?

The feedback after each performance has been tremendously affirming. Audiences have been genuinely gripped and moved by the piece. A friend who has seen it five times says he sees something new in it each time.

You currently teach on Portsmouth council’s “working with addictions and recovery” course. Before that, according to your blog,  you yourself went on a council-funded course for people in recovery from addictions and for those affected by addiction. Talking about it, you say: “When I came on this course I believed I had lost the capacity for hope. As a mother of a child gripped by addiction there seems to be only two options. One, the most natural, is to jump in and rescue; the other is to cut yourself off, to demonise the person you love.  I’ve tried both. Neither of them works. If you jump into the well, thinking you can rescue your loved one from drowning, at best all you do is enable them to carry on; at worst you end up drowning with them. Cutting yourself off doesn’t work either – you end up living your life as if it’s inhabited by a ghost. This course offered a third option. It offered a unique opportunity for mothers, fathers, sons and daughters, to get up close and personal; it offered us an opportunity to face our demons.” Was Zones of Avoidance another way of facing those demons?

I quite often write from a place of detachment – I find this an effective way of coaxing the sub-conscious into the open. And when it happens the contrast in tone is harder hitting, as you can see in this extract:

I don’t know how I did it. Turned the particles of my soul

into a stone that could not be moved.

How I watched from my car window as she scurried

into a derelict building at midnight.

God. If you exist you must be something small and solid

lodged like a silver bullet in the barrel of the heart.

The dramatic material provided by living in a battlefield is a gift for any writer. I couldn’t have made anything up that would have been as fascinating as the reality.  I had qualms at first about making the personal so public, but once I found the courage to surrender to the story there was no turning back. My aim as a writer was to find a way of transforming the local into the universal. Including testimonies from recovering addicts and my research into psychoactive substances enabled me to achieve this.

Your website is called Hooked on Words, and covers creative writing workshops, events and projects that you run. It goes on to say that the aim is “to empower people from all walks of life to express themselves through writing. It uses poetry and creative writing to promote motivation, well-being and social inclusion.” You don’t believe in poetry gatekeepers, then?

Most people I work with, especially in healthcare settings, don’t take poetry that seriously. Sharing and discussing poems enables people to get in touch with their feelings. Encouraging them to write something in response, and then to share it within a group can be life-affirming. There are poems, such as Derek Walcott’s 'Love after Love', that have the power to evoke epiphanies in some of the most hardened of hearts. I’ve seen it happen.

If you’re writing for an audience then it’s a different kettle of fish.  I’ve always read contemporary published poetry and used what I’ve admired as a standard to aim for.  I guess if I was starting out as a performance poet I’d be doing the same thing – watching and reading the best of them.  Developing your own sensibility is what’s important – gatekeepers can change. If Jeremy Paxman’s the new poetry gatekeeper I guess we’d better watch our backs!

What’s the poetry scene like in Portsmouth? In 2003, you set up the poetry and music night Tongues & Grooves. It’s still going, 11 years on, and you’ve carried on running it during times when you must have had a lot of other things on your mind. To what do you attribute its continuing success?

There’s quite a thriving writing scene in Portsmouth now. The success of Tongues&Grooves has inspired others in the city to have a go. These things succeed mainly because of the dedication of one person.  It helps if you enjoy being the "project manager" and can get others on your side. I’ve been trying to let go for a while. Next year I aim to concentrate on two or three special events.

Have you some favourite poets? Who are they?

I have all of Selima Hill’s collections so I guess she’s a favourite, but generally I have favourite poems rather than favourite poets. I’d probably take DH Lawrence to a desert island, though. His poems have a way of making you feel less alone.

Do you enjoy performing?

When I was a mature student at Chichester University, I was asked to read at a poetry event, but I didn’t have the nerve to do it.  My lecturer ended up reading my poems for me.  When my first collection, Charcot’s Pet, was published a few years later I was forced to face my demons.  Since then I’ve read all over the place and mostly I enjoy it.  Performing Zones of Avoidance was another leap forward. The piece is quite technical and I have to be alert to the cues and movements. This is on top of having to concentrate on delivering two monologues from heart straight to the audience.  Once I’ve delivered the second one I know I’m on the homestretch and can begin to relax. After each show I feel like I’ve run a steeplechase.

TS Eliot said, "Humanity cannot deal with too much reality" – winning the Ted Hughes award has proved that this isn’t necessarily the case. However, it’s still a struggle persuading theatres and festival organisers to include Zones of Avoidance in their programmes. Perhaps it’s because they don’t fully understand the concept of live literature, or how such a gritty story can be told in a beautiful way.But, hopefully, in 2015 we’ll be taking Zones of Avoidance on tour. Chichester, Swindon and Stoke Newington festivals have all shown an interest.  Once we have five or six dates pencilled in, we will apply for Arts Council funding to offset the costs.

Other than that I’m still writing poems – they seem to have taken an existentialist turn.

I think Jeremy Paxman is going to be far too busy writing his memoirs - he's just got been given a three book deal - to worry too much about poetry in the forseeable future. But who knows.