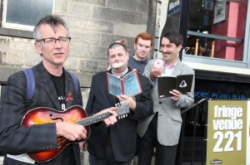 Richard Tyrone Jones is calling time on the long-running  ‘Utter!’ live event that he has hosted for the last 10 years, and on his spoken word career, with a final gig at the Amersham Arms in London on Tuesday 16 December. Tyrone Jones – pictured third from left at the Edinburgh Fringe in 2009 with John Hegley, Tim Wells  and Tim Turnbull - tells Write Out Loud about the best moments, his  heart failure in 2010 that produced a spoken word show and Radio 4 sitcom, the hard slog of promoting events, and why he’s decided “to leap off the roundabout” at a time when he considers the spoken word scene to be healthier than ever.

How do you feel about winding up 'Utter!'?

It's not a wind-up! I really am ending it, after 10 years. Anyone who truly knows me knows that if I say I'm going to do something, I do it. This is the end of 'Utter!' and my spoken word career. And I feel great about the fact I won't ever design or give out another flyer or have to pester people on the internet to come to a bloody wonderful line-up that they should be fighting at the doors to get into, because every 'Utter!' has been a frankly ridiculously good value Black Friday sale of poetry.

How many different venues has Utter! been staged at?

The highlight, apart from holding my own funeral, was I think raising £600 for the British Heart Foundation at a gig including Robert Auton and Kevin Eldon. Or maybe it was Utter! Evolution with Robin Ince and Baba Brinkman. Or maybe it was the MisGuided tour of Stoke Newington where Clare Pollard gently whispered “You're a prick” in a drunk heckler's ear. Maybe it was when Keith Jarrett's solo show got two five-star reviews at the Edinburgh Fringe. Maybe it was the early days when Word for Word writing group read and brought all their mates - a real community vibe. But actually it was probably when we crammed 92 people into the Green Note for The PlathDeath Eve special which included me wearing an eggbox chin as a brutally misogynistic caricature of Ted Hughes for 'The Story of Ted and Sylvia (in puppets)’. That was when Facebook was actually useful for organising events.

How is your health these days?

Up and down. My Big Heart, (which almost killed me in 2010 and gave rise to my 2013 Radio 4 spoken word sitcom) is apparently back to normalish size and regularish rhythm, but I've just had a series of migraines that have meant looking at a computer screen really hurts so I'm behind with my cut and paste personalised invites (it's SUCH a glamourous job, poetry promotion). It was because I went out jogging for 16km without gloves.

Do you think the spoken word scene has changed in the last 10 years?

Sure. More notably in the south and cities, it's become more professionalised, slamised and Americanised. While eventually the best poets do usually win, this means in the earlier rounds you sometimes have to sit through with emotional auctions and substandard Tempest and Polarbear clones. Still, before the whole “spoken word” explosion you had some “performance poets” slavishly attached to rhyming doggerel who thought poetry began and ended with John Cooper Clarke and Pam Ayres. Also now, with a set career trajectory available in spoken word (if you're 16-25 and city-based, anyway) there is a certain slick homogeneity that comes with the kind of PC, non-sweary material you have to come up with to get the schools and regional theatre work. Too much identity, not enough politics. Too many workshops, not enough raw talent.

However, those are but the side-effects to having a larger, healthier spoken word scene than ever before, exposed across major festivals - music and Edinburgh, Channel 4, YouTube, BBC radio, Burning Eye publishing, etc. But a lot of the figures that built up this scene, promoters and publishers, haven't reaped the benefits themselves, myself included. So having done my bit to push, it's time to leap off the roundabout while it's still healthily spinning.

The last ‘Utter!’  is at the Amersham Arms, New Cross, 7pm, on Tuesday 16 December. More details and Map

"Too much identity, not enough politics. Too many workshops, not enough raw talent." Interesting... Is this London scene only, do you think, or more national...?