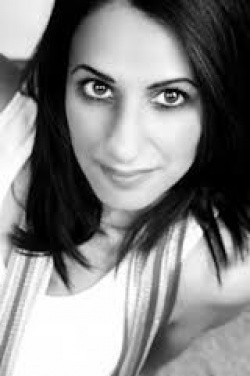 Two poets, Mona Arshi and Michael Hudson, have shared the £10,000 poetry prize in the Manchester Writing Competition this year.

Mona Arshi, who was born to Punjabi Sikh parents and grew up in west London, initially trained as a lawyer and worked for the human rights organisation Liberty. She began writing poetry in 2008 and received a masters in creative writing from the University of East Anglia, won the 2012 Magma poetry competition and was runner-up in the Troubadour last year. Her debut collection Small Hands will be published in 2015 by Pavilion Poetry, part of the Liverpool University Press. She said: “it is a really special competition because you don’t just send in one poem – I sent in five poems. It gives you a real range and opportunity to show them a cross-section of your work and they liked it enough and that has given me such a boost to my confidence.”

Michael lives in Fort Wayne, Indiana and works at the Allen County public library's genealogy centre. He won the 2009 River Styx international poetry contest, the Madison Review’s 2009 Phyllis Smart Young prize, and the 2010 and 2013 New Ohio Review prize for poetry.  His poems have twice been nominated for the Pushcart Prize. He said: “I am feeling quite bedazzled at the moment, and in the throes of some really embarrassing Anglophila. I may even give soccer another chance (I already love Philip Larkin).”

Greg - good to know. Many thanks for taking the
trouble to include that information. May all such
events prosper and provide pleasure. God knows,
we could all benefit from being cheered up!

All is not yet lost, MC. Cafe Writers are offering £100 for the funniest poem. Not £10,000 admittedly http://cafewriters.co.uk/home/news-2/poetry-competition/

Hi Isobel - I'm inclined to believe there's
something of the "Hollywood Pretentious" in
poetry these days. Putting rhyme aside,
with the knowledge that some of the most
serious stuff written used its format, the idea that tears and fears are more important
than levity and lifting the human spirit
needs to be addressed.
Laughter is surely essential to the human
condition and the skills needed should be
recognised and given due prominence.
The prevalence of doom and gloom in much of what is produced is, perhaps, due to the
absence of an ability to create the opposite by those who participate in these
competitions as judges or entrants.
"Profound" may be worthy but it can also be a
false and depressing premise indulged in for its own sake. The "challenge" today is not to my intelligence but to my patience.

I don't think anyone stands a cat in hell's chance of winning anything with humour and rhyme MC, much as I love it myself. It's the same in performance poetry slams - no matter how good the material is, it just doesn't stack up against the serious stuff - and maybe that's the way it should be - as humans, I think we are wired to 'care' more than we are wired to laugh.

Perhaps there should be a special category and competition for humorous poetry?

I note how often mention is made of entrants'
connections with "university" and "creative writing".
I'll restrict further comment on what I've read:
"I noticed the absence of humour and rhyme -
Each has its worth - and is worth precious time."