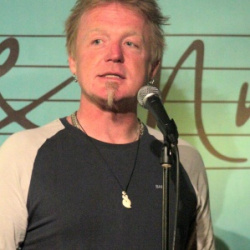 The quietly-spoken, hard-travelling Steve Pottinger was back at Kingston’s Rhythm & Muse on Thursday night. As he told his audience, he gets “a real buzz” out of travelling to different gigs, meeting different people. His daytime job is in the music business; being on the move is in his blood.

There were long, crafted poems, of honest, unflinching vision, about the pop-optimism of single-mum girl next door, singing through the bathroom wall; the 25-year pain of the Hillsborough families; the “Bongo-Bongo” mindset lurking within your average Ukip politician; and the tale of Kate Sharpley, a munitions worker who threw war medals back in the face of Queen Mary during the first world war: “You cared nothing for their baubles, dipped in poor men’s blood, and you told them so.” Plus a couple of love poems, too, including one that left you in no doubt about Pottinger’s vison of utopia.

The other guest on Thursday night, singer-songwriter James Burton, provided thoughtful lyrics and pleasing melodies, and really had no need to apologise for the rather downbeat nature of his material. It’s never proved a problem for Leonard Cohen, after all.

In July this year organiser and poet Alison Hill and fellow compere Nick Poole celebrated Rhythm & Muse’s seventh birthday; soon R&M may be forced to leave its ideal home at the Ram Jam Club because the Grey Horse pub that houses it is being sold, and may be upgraded for the benefit of “gastro” drinkers. Don’t they realise that a quality poetry and music night like Rhythm & Muse adds value to any pub?  Any chance of Steve Pottinger lending his name to a new cause?
Greg Freeman

It's all happening at the zoo: poetry weekend in Regent's Park ►