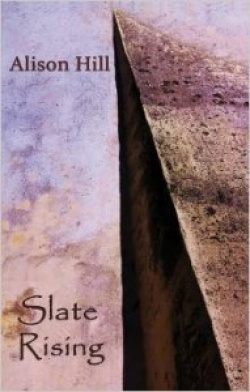 This collection combines the familiar with a touch of other worlds, observed with an eye that is compassionate as well as curious. At times, there is an unsettling hint of something out there, as in ‘Moon Tide’:  “The scratch and pull of the caught bramble / flanking the summer house taps a delicate / percussion to the wind on the hillside.” This sense of unease is reinforced in ‘Rapunzel’: “The head of the girl with pigtails / has been placed halfway up / the crimson staircase. // she is girlhood without the games, / skipping without the rope.”

The horrors of the world sometimes come uncomfortably close to home – and we are being warned that this is ever more likely in the future. Alison Hill attempts to connect with this, from the comparative safety of the suburbs, in ‘Blistering’: “We fan ourselves in shock and move slowly / / with nothing much worse than the threat of sun- / stroke to spoil our day, to blister our skin / under a bloodshot sky.”

Quiet but touching poems of the familiar are a strength. ‘Just a Phase’ both looks back to pre-children days, listing enticing destinations, reflecting ruefully but without regrets, and also on the difficulties of holidays with small offspring, struggling into French cafes with toddler, baby, buggy and bags, that every parent will recognise: “Limited time to linger, / we thought fleetingly of calmer days – time / for leisurely beers and do you remember …”

Such poems of the familiar sometimes have a gentle twist in the tail, such as ‘Red Feathers’, in which the poet asks her parents for their memories of the 1950s. Her mother recalls going to see Annie Get Your Gun on their first date. Her father Googles the decade instead: “They pooled memories by phone, blending history from two / separate houses – it was the decade their story began.”

There are understanding observations of older, often lonely women. In ‘Light at the End of the Garden’ Hill feels a momentary bond with one who rises and draws her curtains back at the same time, exchanging fleeting glances with her, but “too far apart”; ‘She hummed while she ironed’ conveys warmth towards a neighbour that some might regard as just nosy; and ‘Blush’ empathises with an eccentric collector of pink light bulbs.

I’m a great believer in the power of railway stations and trains to fire the poetic imagination, and was heartened to find at least three such poems in Slate Rising. ‘To a Girl on Platform Three’ addresses the march of time, and a girl “young enough and cool enough” to wear a short lilac dress:; ‘Waiting Room’ watches an orange-peeler;  passengers are observed in ‘All Stations to Brussels.’

Sometimes you’re left wanting more, feeling that the poem has ended too early. In this context it is interesting to read a poem like “Semi D’, which appears to reflect a sense of frustration with the suburbs – “nights when the nets squeezed out dreams” – and includes a reference to “one ear on the baby sleeping in the hall”, a distant echo of Cyril Connolly’s warning about parenthood and creativity: “There is no more sombre enemy of good art than the pram in the hall.”

But Hill, who runs the monthly Rhythm & Muse poetry and music night in south-west London, is too outward-looking to dwell on such matters. If there is a theme to this collection, it is perhaps the passage of time, which no one deny, and she prefers to celebrate, watching a child grow up in ‘Dandelion Time’:

We have only the photograph

to remember the exact shape

of his mouth, his concentration

Some years later he grabs at a stalk,

running as he blows, tossing the clock

away in his haste to keep moving.

The opening poem, ‘Loose Change’, talks of “the gift of life”, and a bus journey winding around “wet hills stitched / with dry stone contours”. These poems are warm, intelligent, and repay re-reading; and leave this reviewer keen to see where Alison Hill travels, in a future collection.