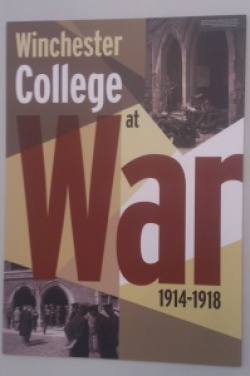 The centrepiece of Winchester poetry festival took place on Sunday afternoon within the war cloister of Winchester College, which was built in the early 1920s to commemorate the school’s war dead. Members of the school’s Officer Training Corps elite were fast-tracked to the front, to lead men over the top. Poems were sent back from the trenches and published in the school magazine, The Wykehamist; the school lost 572 former pupils in the conflict.

Throughout the poetry festival the theme of the centenary of the first world war has remained central. Michael Longley said it was “very moving to be reading poems in this sacred space, with the bells ringing and butterflies fluttering between us”. He read a short poem by Siegfried Sassoon, ‘The Dug-out’ – “You are too young to fall asleep for ever; / And when you sleep you remind me of the dead” – two by Wilfred Owen, ‘Fragment’ and ‘The Send-off”, and one by Robert Graves, ‘Last Day of Leave’:  “ ‘Do you remember the lily lake? / We were all there, all five of us in love, /Not one yet killed, widowed or broken-hearted.’ ‘’

Longley concluded by reading two of his own poems, one about Edward Thomas – “The nature poet turned into a war poet, as if he could cure death with the rub of a dock leaf” – and ‘The War Graves’, which talks of comrades scribbling in the visitors’ book: “The severest spot, the lads did well, we came to remember.”

He was followed by David Constantine, who has translated German first world war poetry, including that of Alfred Lichtenstein, who was killed on the Somme in September 1914, and took a satirical, sardonic view of war from the outset: “We’ve had peace for too long, the fun is over now …”  Constantine pointed that Lichtenstein’s poems were published in a German magazine that took a socialist and internationalist stance, and also published poetry by Rupert Brooke.

At the start of the war Bertolt Brecht was too young to be called up. He had poems about the war published when aged 17; ‘Legend of the Dead Soldier’, about a war victim being dug up and declared fight to fit, which was written at the age of 20, in 1918,  contributed to him being put on a future Nazi death-list.

The poets were introduced by Sasha Dugdale, who said she felt that with the deaths of the last veterans from the conflict, the first world war was now “in limbo – neither history, nor the present”. Before the main readings the event had been introduced by Richard Stillman, head of English at Winchester College, who in turn asked three pupils to read war poems with a Winchester College connection. The most remarkable was a long poem, ‘Cold Feet’, examining concepts of courage, by former pupil and future famous playwright, AP Herbert. The school is currently staging an exhibition about the conflict.

On an afternoon when the sun shone, then it clouded over, then the sun came out again, the wind rumbled through the speakers in Winchester College’s war cloister, like the thunder of distant guns.

THE WARM, engaging poetry of Jackie Kay provided a fitting climax to Winchester poetry festival on Sunday afternoon. There was a poem about lifelong friendship, ‘Fiere’, also the title of her most recent collection; ‘The Returning’, about the fits suffered by her young son Matthew; finding her birth father in Nigeria, a story also recounted in her memoir, Red Dust Road; two poems about her friend, the late poet Julia Darling, who was born in Winchester; and one about a public immigration struggle at Heathrow, ‘Would Jane Eyre Come to the Information Desk?’: “We are not liberty to say anything. We are not at liberty.”

She recounted how she had written a series of poems about an area in the Scottish Highlands that were published in the Oban Times: “The Guardian asked to publish them, but I thought, No, the Oban Times.” Later she walked into a shop in the area and was pleased to one of the poems with her picture, on a laminated card on the wall. But her dad was unimpressed: “ ‘Aye, aye, Carol Ann gets to be poet laureate, you get to be poet laminate.’ “

A long, powerful poem about the Scottish miners’ leader Mick McGahey – not the most obviously charismatic of socialist heroes – speaks of how the spooks who tapped his phone couldn’t understand his gravelly accent, and encountering old foes like Thatcher and Heath “down death’s mine”. McGahey had been her hero after complimenting her on her red dress when she was aged eight: “Nice colour, comrade!” She told her enthusiastic listeners at the finish: “You’ve been a lovely crowd. I don’t want to use the word ‘audience’; that’s too formal.”

JACKIE KAY was preceded by Ros Barber, who read a number of extracts from her remarkable verse-novel, ‘The Marlowe Papers’, in which she advances the theory that Christopher Marlowe, apparently killed in a tavern brawl, was the real author of Shakespeare’s plays. The first poem, ‘Death’s A Great Disguiser’, evokes the violent, unstable climate of the times: “The burning heretics and eyeless heads / that slow-revolve the poles on London Bridge.” Another poem recounts how fellow playwright Thomas Kyd was arrested, tortured, and in a forced confession “set inquisitors” on Marlowe, his former roommate. In ‘The Author of Hamlet’, Marlowe refers to himself in the third person: “What a clown he is, this prince of perfect souls … only a fool writes plays and hopes to be understood.”

MENTION must be made of the poetry magazine Magma, and its role at the festival. Christopher Reid spoke on Sunday on the poet’s craft and inspiration, in conversation with Jon Sayers, which was the inaugural event in the National Conversation about poetry that Magma has launched with the support of Arts Council England. The magazine also organised a pop-up poetry competition at the festival, won by sixth-form college student Dom Cramp with his poem 'The Broken English'. You can still submit poems on the theme of ‘the street’ to Magma for its next issue but one, until a deadline of 30 September.

THE SIZE of audiences at this inaugural poetry festival has shown that Winchester was ready and waiting for it. In a short closing speech that summed up the spirit of all that had gone on, the festival’s chair, Robert Hutchison, said audiences had “rocked up in ways we hadn’t anticipated”. And then he concluded with Prospero’s speech from The Tempest:  “Our revels now are ended …  We are such stuff / As dreams are made on; and our little life / Is rounded with a sleep.” Many of his listeners found the words remarkably moving, whether they were by Shakespeare – or, indeed, Marlowe.

Festival gets off to flying start