Is Billy Collins still at the top of his game? A fan's view from Edinburgh book festival 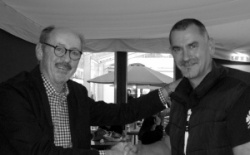 Book festivals, unlike music festivals, rarely seem to set many people into a heightened state of animation – unless, of course, those people are bibliophiles.

There were over 800 events taking place during the two weeks of this year’s Edinburgh book festival, but I was there simply to watch and meet “the most popular poet in America” - Billy Collins. It’s no great secret that I admire his work, but it’s only recently that I’ve reminded myself just why.

The internet is full of opinions and testimonies regarding this most popular poet, and not all of them are encouraging. But many of those who opine positively do so choosing similar adjectives and superlatives in their descriptions of his style and his seemingly familiar arc of poetic style.

I’ve read most of his work published over the last 20 years and it’s fair to say that there is much more than just a familiar arc about his work – much of it is very, very similar, but much of it is also different. But here’s the thing. Some of it is ab-so-lute-ly brilliant.

Of course, many of those pencil-necked poetry puritans often baulk at his work. Many can’t even bring themselves around to recognising his writing as poetry – those dusty critiques will often include the words “prosaic” and “whimsical”, and I couldn’t disagree with such comments – but there are few contemporary poets out there who write as poetically as Collins. The question is: is he still writing poetically, or is there any truth in the urban myth that BC has finally ran out of things to say in his distinctly sublime way, that way in which he makes the reader feel like they’re pouring the words straight from any of his books and over themselves before luxuriating in the depth of their meanings or splashing around in the froths and bubbles of their humour?  Only one way to find out - but before I indulge myself with his "on the page" stuff, I'm about to watch him live for the very first time - here he comes.

Well, that was fun. A solid 45 minutes of his poetry followed by a 15-minute Q&A session. I was sitting dead centre in the second row, and the three reserved seats directly in front of me were the only empty seats in an otherwise packed auditorium. I wondered if Billy himself may later be inspired to write a poem about those three empty seats, imaging where their learned but failed occupants went instead of listening to him. Whoever they were or wherever they went, they missed him read many of his well-known and established poems, but ‘The Lanyard’ and the crowd's response appeared to finally relax both the audience and Billy himself.

It was the first time he'd appeared in Edinburgh since 2006. I don't know what happened to him on that occasion, but initially he looked frightened to death as his first few, lesser-known offerings were met with those gentle, almost tired slaps of hands that most performance poets who don't perform per se are more than familiar with. But this is Billy Collins, and seemingly sensing the staid atmosphere in the room he rattled off a series of his light-hearted classics and in between filled the otherwise dead air with witty one-liners and humorous little ditties  - ‘Bacon & Eggs’, “the chicken merely contributes - the pig gives its all” - type of thing. Just enough of a fill to decide which way to take the room with his next poem. And that's the thing: filling 10 minutes with your poetry is difficult enough, especially when you're more than conscious of the audience and their changing reactions. He did it for 45 minutes, and apart from the odd trip over a loose-fitting word he was perfect with his delivery and with his inimitable tone and turn of phrase.

The Q&A was shanghaied by a small group of Americans but he answered their questions with great aplomb and his knowledge of other poets was obvious, including Frank O' Hara and Coleridge, who it seems may have influenced him to a degree greater than he may care to admit to. Billy Collins live was every bit as good as I'd hoped. and if he does write a poem called ‘ The Three Empty Seats" or anything remotely similar - I want a minor credit in his next best poetry selling book. Before which,

Aimless Love by Billy Collins. Page XVII . I'm going in ... see you on the other side...

It now seems that the secret to reading any of Billy Collins’s most recent work is to read it in small pieces. Tiny pieces. No more than a poem at a time.

That’s the conclusion I reached after spending the last week or so burrowing through his words sewn into the furrows of his now familiar, recognisable style. His most recent poetry reinforces that established cyclic arc which, although not completely predictable, on this occasion does little to grab and maintain the attention of even the most patient of readers.

You can always read a poem too fast but never too slow, is advice I often remember when I’m reading his work. I guess it helps when you’ve seen and heard the man himself perform out loud and you can map his sardonic speaking voice on to many of his earlier works; ‘Forgetfulness’, ‘Litany’ and ‘Another Reason why I don’t Keep a Gun in the House’ are great examples of Billy at his best in terms of both writing and performing. But much of those razor-sharp barbs of imagery are sadly lacking in many of these latest poems. And the humour too has become a little – not funny.

I’m sure there are many people who, when reading 'Looking for a Friend in a Crowd of Arriving Passsengers', would muster a wry smile, and ‘To My Favourite 17 Year-Old High School Girl’ has already been shown to make a president of the United States laugh out loud. But these are among the few exceptions contained within 50 new poems that seem to fail to reach the same dizzying heights of Collins’s earlier work.

But the beauty of his work is that much of it depends on the reader, too. Some themes are so subtle and well hidden that many poems have to be read over and over, in different moods, at different times, and/or in varying degrees of light to appreciate the real magnificence within his work.

Ignore those who describe his work as “prosaic” and “whimsical” – because much of it is exactly that. But his poems are also "consistently startling, more serious than they seem, they describe all the worlds that are and were and some others besides" (John Updike). There are few contemporary poets around today that can write as poetically as Billy Collins, even on his bad days. Although much of his most recent poetry does sometimes try to beat the same defender more than once before it crosses the ball, sometimes it’s rude not to read and marvel at these occasional bouts of showboating, whether you support team Collins or not.

The real beauty of his poetry is that every poem is nuanced with a fine brush. His poems may be in the same desert but they are each distinctly different tents. Billy himself wants his poems to “begin in Kansas and end in Oz”. And they can do that. The reader just has to be in the right place at the right time when the Twister hits town.

Great thinking Francine! Now wouldn't that have been a night to remember :)

The three empty seats were set aside vicariously for you (Isobel), me, and Alvin! Duh... ;-)

Many thanks C, I and J for the comments/feedback. :)

I also like Billy Collins. I thought it odd that I could only read a little of his work at a time despite enjoying much of it. Maybe there is something more universal in that.

Now someone on here needs to write that poem about 'the three empty seats'!

What a grand review Darren! At once both prosaic and wh... No, only kidding, or showing I was listening. This was one of those occasions when I had wished I could have gone to Edinburgh just to see the man, so was delighted and very grateful to have your review as the next best thing; or perhaps even better, given your knowledge of his work.
And you it was who introduced me to his poetry. So, thanks twice.