Death Of A Poet (Anthem For Doomed Youth) MUSIC VERSION 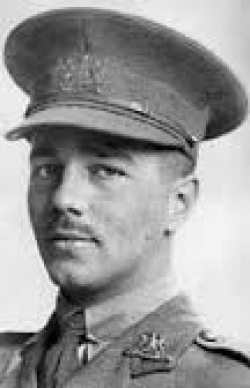 Death Of A Poet (Anthem For Doomed Youth)

The grey November sky has lost its light,
just one more boy has fallen to his death,
another lad who won’t survive the fight
or pass beyond this final exhaled breath.
Though many soldiers leave this war unheard,
their stories lost forever, never told,
this one will paint us pictures with his words
that will not lose their power or grow old.

A week beyond that fatal canal dawn
a peace is brokered and the guns fall still.
In Monkmoor Road a joyful early morn
is destroyed and a mothers tears will spill.
Outside the bright clanging Armistice bell
chimes “Wilfred Owen has a tale to tell”.

What passing-bells for these who die as cattle?
Only the monstrous anger of the guns.
Only the stuttering rifles' rapid rattle
Can patter out their hasty orisons.
No mockeries now for them; no prayers nor bells,
Nor any voice of mourning save the choirs, -
The shrill, demented choirs of wailing shells;
And bugles calling for them from sad shires.

What candles may be held to speed them all?
Not in the hands of boys, but in their eyes
Shall shine the holy glimmers of goodbyes.
The pallor of girls' brows shall be their pall;
Their flowers the tenderness of patient minds,
And each slow dusk a drawing down of blinds

words for 'Anthem For Doomed Youth' used by kind permission of the Wilfred Owen Society - taken from 'Wilfred Owen - The War Poems' edited by Jon Stallworthy published by Chatto & Windus Ltd. This work will feature in a CD Collection & Book due for release by THE CROWS OF ALBION (Ian Whiteley's recording project) in the Autumn of 2014

◄ Death Of A Poet / Anthem For Doomed Youth

A powerful and inspired combination of word and
tune - with added resonance from the lines of
Owen himself seamlessly included.
Deserves its place among the most memorable
reminders of how that war robbed the nation of
so much.

I particularly liked the higher tone of your singing for the singularity of your own, and the deeper tone for the generality of Owens sonnet...
well done!

apologies for re-posting this so soon - but I finished the music/backing on it this morning and wanted to share it first on a poetry site rather than my usual Soundcloud/Bandcamp music sites. Hope you like it WOLers - there's a bit of distortion on this MP3 version - but rest assured the full wav file has no crackle ;-)

there's a cleaner version on Soundcloud - plus links to other tracks featuring on the imminent release - HERE: https://soundcloud.com/the-man-at-the-back-1/death-of-a-poet-anthem-for-doomed-youth