Reaching for the moon: Lunar Poetry magazine is launched 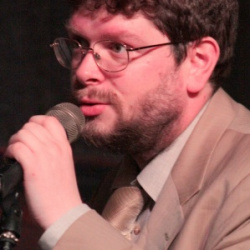 One door closes, another opens. Last month saw the departure of the long-running Monkey Kettle poetry magazine, suspending publication indefinitely after 15 years. Now some good news … a new poetry magazine was successfully launched in London on Sunday night. It costs only £3, includes book and performance reviews, analysis and articles as well as poems, and aims to come out once a month.

In an editorial, Lunar Poetry magazine’s Paul McMenemy, pictured, tells it like this: “Basically, this magazine is for me. Or rather, me about 10 years ago, as a skint student who was sort of interested in poetry, but didn’t really know how to find any, and couldn’t afford it in any case. For a long time, my education in poetry only covered the period up to about 1970, because you rarely found anything more recent in charity shops or public libraries. I moved around too often to make a subscription to a magazine worthwhile, even if I could have ponied up, when it might come out once every three six, 12, 17 and a half months.

“What I wanted was something that came out regularly (monthly, say), cheaply (£3 for a paper copy; pay-what-you-like for the e-version), and not only carried lots of good new poetry, but intelligent writing which could help me find more of it. So that is what this is supposed to be.”

In the first issue Carolyn Oulton’s poem ‘Second Prize Answer’ is examined in detail by Wynn Wheldon, David Clarke and Claire Trevien; Paul McMenemy reviews live nights at Utter! and Jawdance, both in London; and McMenemy also contributes a long article entitled Spoken Word Past and Present, part 1. There is Bad News to Verse, “because we think there ought to be more poetry in the news, and more news in poetry”. Next month’s issue will include more live reviewers, and a round-up from Edinburgh, we are promised.

At Sunday’s launch there were readings by magazine contributors Andrew James Brown, Godefroy Dronsart, Alwyn Marriage, Sean Wai Keung, and Tim Kiely, while open micers included David Turner, Lizzy Palmer, John Paul O’Neill, and David Andrew. There will be other Lunar launch nights, at Bar Loco in Newcastle on Thursday 7 August, and at Blackfriars in Glasgow on Sunday 10 August, and each subsequent issue will have its own launch night, too, with Lunar is looking for other suitable venues across the UK.

Paul McMenemy delivered a number of Lunar-related poems on Sunday at the Amersham Arms in New Cross. One of them included these lines: “We never really believed we could make it to the moon … in fact it was a breeze.”

With its low price, its willingness to look at both page and live poetry, and its keenness to be topical and to appear regularly, Lunar Poetry may have identified a gap in the poetry magazine market. It's a different, imaginative mix. We at Write Out Loud wish it every success.

I've just received my copy of the first issue.Nicely produced and pleasing to handle. The content is open to discussion but the overall impression is favourable to the concept and belief behind the product.

I too had a dream that poetry would find a local magazine stand every month....

This looks interesting - and worth checking out via an order for a sample copy...with a view to more of the same.