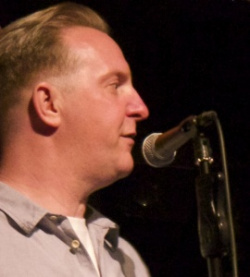 An audience of 250 packed into Manchester’s Frog and Bucket comedy club, at turns whooping and hollering, mad with laughter, and trembling in tears, as the words were made flash and dealt amongst them by Manchester’s unofficial poet laureate, Tony Walsh, aka Longfella.

Tony knows how to tell his truths in a way that makes them ours too, with lines that could stop a train. Perhaps his best-known such poem, performed last night is ‘A Girl, Like, Y’know’, which, he announced, is now part of the school curriculum: “And he – hits me, and that / And he’s - kicked me, and that / But I – I – I love him and that, like, you know?”

Sure, it’s brutal and direct, but so are the lives he records from his experiences, his own childhood and his professional career in community work. It speaks its veracity in the audience’s vernacular.

The poem of his that always snags me is his ‘Posh Things’ – not read last night - a litany of what his childhood lacked: “Posh things; like paying for your school dinners. And leaving some … Posh things. / Like fathers.”

He’s a seasoned professional poet and performer with a highly successful background in slams, poet-in-residence at Glastonbury and other festivals, and many years on the Manchester and wider circuits, where entertainment is “valued not sneered at” to quote from his ‘Manifesto’, an impassioned, humane, authoritative analysis of the UK live poetry scene, that forms the introduction to his popular book, Sex & Love & Rock&Roll.

Supported by comedic poet Marvin Cheeseman, Tony’s event was in aid of charity Forever Manchester, who commissioned Silver Sparks, a poem that formed the centrepiece of a set that spoke directly from his Mancunian soul, illuminating the spark of a city of which he is so proud: “They beam a stream of dreams, it seems, from deep in outer space / And when they meet our atmosphere they turn to silver sparks / As the spirit of Greater Manchester that sets this place apart.”

Like much of Tony’s oeuvre, the piece constantly flirts with what some might see as shoulder chips, the sense of a city whose pride in its achievements must be set against the greater distance that has had to be travelled by those born with wooden spoons in their mouths – sentiments familiar to his audience and reflective of the necessity of the work of the charity: “And it sparkles in the Mondays and it sparkles in the Roses / But it sparkles in forgotten kids, like gods with snotty noses / And it sparkles as the self in those who’ve only known self-doubt / And it sparkles as potential when we’re starting off with nowt / Yeah, there’s a silver shining right across the proud Mancunian nation / And there’s a silver anniversary for our Community Foundation.”

Tony related his personal journey from starting to write and read in public in 2003 (when he supported Write Out Loud’s initial development), whilst kindly acknowledging the “life-changing” contribution that Write Out Loud made for him, and does for others.

The night raised over £2,500 for Forever Manchester, and set the crowd buzzing as it spilled afterwards into Manchester’s Oldham Street.

How do you follow that? Well, you stroll a few yards from the Frog and Bucket and step into the Castle hotel just in time for the start of the Bad Language monthly poetry night. Which, ahem, does not appear on the Write Out Loud gig guide. Entirely up to them, of course, but it is a bugbear: the guide is relied on by thousands each month, both individuals looking for where to read or listen to poetry, and organisers for “claiming a date”: making sure they don’t clash with other events, for which the gig map/date search is invaluable. And we rely on organisers to keep their entry up to date. Roland, please help us to help you. Your event is listed, so easy to revive it, but shows as finishing in 2012.

That said, what I was able to see of the night (train to catch) was absolutely stunning, opening with a mesmeric set by Liz Berry, fresh from appearing at Wenlock poetry festival, who talks about winning the Forward first collection prize in Greg’s recent article.

Like Tony Walsh, Liz’s work is rooted in her birthplace, proud of its accent and dialect, as in ‘Homing’: “For years you kept your accent / in a box beneath the bed, / the lock rusted shut by hours of elocution / how now brown cow / the teacher’s ruler across your legs.”

Unlike Tony Walsh, Liz Berry is neither tall nor loud, except insofar as the clarity of her writing is her forte. She leans into her reading like a bird with a scrap, bright eyes constantly looking up at her audience, whose rapt, pin-drop thralldom is her only, but ample, feedback. Her book, Black Country, won her the Forward Prize, but if you get the chance to see and hear her read, you will glean that, like Tony Walsh, it’s the way she tells ‘em that takes her work to a higher plane: (from ‘Bird’) “I raised my throat to the wind / and this is what I sang …” Pure magic, indeed, and applause after every poem.

One of few remaining ‘original’ Manchester pubs (on the 1970s CAMRA beer crawl if memory serves - unlikely), the Castle hosts not one but two poetry nights, the other being, The Other Room, oddly, the night after Bad Language.

◄ Reaching for the moon: Lunar Poetry magazine is launched

Meltdowns, anthropomorphic puzzles, and other surprises at The Other Room's birthday party ►