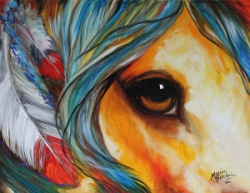 This story, The Elk Dog is retold from the original stories of the Native American Tribal (the Orphan Boy and the Elk: Blackfoot Tribal). It is a story of the coming of age and lightly suggests guidance for young people regarding gender identity.

The collection ‘Wyrd as Folk; Retelling the Legends by Rachel Bond, includes stories from a wide cross section of folk lore/ legend and myth and includes the retelling of much loved tales from The British isles, Scandinavia , America and Greece.

In the days of the Native American braves, a young boy named Red Shadow was.

He did not belong to any tribe. He had been banished by the men and none of the women would even speak to him, because they believed he was different to them. Today we might say he was an orphan because he had no mum or dad to look after him.

Red shadow knew he was born he just did not understand his name.

For years and he to talk to his tribal group, its families, even to the outlaws and the hunters. After years of rejection he realised that all he really wanted was to belong and to hear his name said with love by the people he wanted so much to love.

So, he approached the chief of that time, Darkest cloud.

‘Daughter of Man, you know not who you are.’ Then after a long pause, ‘Go for me and find the Elk Dog.’

Red Shadow was confused. Usually people told him ‘Go away boy!’ Yet here was the Chief himself talking to him and giving him a task. Addressing him directly as daughter.

He felt ashamed that he didn’t understand and had many questions he wanted to ask but he knew enough that when a Chief sets you a task it is one that you have to work out for yourself.

He searched and searched on land and sea, for forever and a day it seemed, but he could still not see the elk Dog, for it is difficult to find that which we are looking for if we don’t know quite what it is.

One day he encountered Sitting Eagle, an Elder of another village who was smoking his pipe of wisdom. Red Shadow knew he was not supposed to disturb the elders but if he was going to make progress he knew he needed some guidance.

‘My Chief has asked me to find the Elk Dog yet I know not where to look.’ He asked Sitting Eagle.

‘The Elk Dog can only be found by the bravest of our tribes’, Sitting Eagle said between puffs on the pipe,’ As you have been so bold to ask, then I tell you this. The Elk Dog is not male or female but is an Original and the first of its kind can produce a herd.’

Red shadow was so excited at gaining this information that a new hope inspired him.That new hope kept him going on his travels for a whole year long but a year is a long time as a boy and he became desperate from looking in all the wrong places.

One day he found himself at the same stone in the scrub outside the village that he had first seen Sitting Eagle, the elder. He tried hard to connect his tired mind.

‘The Elk Dog can be found at the bottom of the deepest lake’ Stone Eagle said.’ It will take the bravery of one who can breathe underwater and the wits of one who can lead a herd to be able to complete this task.’

As Red Shadow didn’t even know what a wit was he knew he would have to muster all of his courage to find the lake and find a way to get to the bottom of it quickly. He thought about how dearly he needed to prove himself to his own tribes because for every year they discarded him he grew five years in determination to be better than the very best.

However, he was still really young and very, very lost.

‘Where is the deepest lake?’ He thought hard through mists of tiredness until he strained so much to think, that he collapsed.

He lay in the dewy morning grass, wet through and sobbed with all his heart till he fell asleep.

Some time later the sun rose from the East.

Through his tears that formed in the dark hours before sunrise, Shadow awoke to feel the tiny drops of heavenly mist clear away the ache in his head.

Raising his eyelids, he began to see the tiny cobwebs spun through the night by millions of tiny spiders. Grandmother Spider woman had been at work making cocoons for her billions of babies. Within these webs, Shadow felt his earthy body glow and he felt connected.

‘Where do I find the deepest lake?’ he asked of his Grandmother Spider Woman, she was sure to know.

He blinked his tiny eyes open. In the distance like a mirage, a shimmering surface lay frozen moving in the shifting light back and for .

Shadow lifted himself up and galloped forward. But the stones knew that he was really still asleep and they tripped at his running feet. He kicked them aside and as he did he lost his balance.He CRASHED head forward and flew  into the mirror like deep before him . He knew he might rightly die but Shadow had grown so tired of being lost he knew that if he died he would only take himself with him and in the second before the danger he felt at peace with this.

But, dear readers, our hero did not end there.

As he fell, through the shattered illusion of the ground, like Alice as we know today, through the looking glass and beyond into the rabbits hole, Shadow did not fear. For unlike Alice, Red Shadow had a true purpose.

Beyond the layers of ice he could see the movements of the Elk Dogs. Not one but hundreds of them, fields full.

Grandmother’s voice sang in the underwater world, ‘Our people are like the seasons, they are as perennial as the grass.’ Shadow knew he must complete his task and took good heed of the words that told him he belonged to a race as one of immeasurable stars, or of as many as the different sea grasses he sawm through and that his place was to grow strong and surrender to the coming winters as that is what his people do. He knew that his people always rise again, just like he would.

So on he drove through the icy water, through the sea weeds and the algae breaking its grip on him every time. He took the webs he had collected from the morning and to help him keep his breath he wove them steadily with his body swimming like a fish and his hands spinning like a spider until he had created a great lasoo.He remembered the women making these and how they stitched without a minute to talk to anyone. He remembered the way the men would hunt and trap their kill in nets and how tired and heavy their speech would be after all of the work.

Shadow threw his webs at the elk dogs and with instinct he proudly led them back onto land and directly back to his own tribe to give them to Darkest Cloud his own Chief.

As he journeyed back past the stone of Sitting Eagle and back towards his camp, Shadow knew the weight of hard work and it humbled him. With his head down he passed the people who would never give him any time and they cheered and clapped him, waving branches and and singing songs of wonder at the sight of the Elk Dog herd and Red Shadow returned.

Even though the people did not speak to shadow before this quest, every single one of them had noticed he was gone and every single one of them was ashamed to see him return with such a proud find.  It put to rest their gossips stories that he had been dragged away by cayotes who didn’t want him and left him to die by the beak of a vulture. They sang his return now instead for it surprised them all and they all wanted to talk to him.

Shadow was saving all his words to find the right ones for the Chief. Shadow no longer wanted or needed to talk to anyone else.

Chief Darkest Cloud sat solemnly as he cast his eyes to see the beautiful creatures Shadow had brought. The Elk Dog was indeed a mysterious creature as if from another realm. Bright eyed and strong in muscle their bodies could carry vastly heavier weights than a mere human. Today we call the Elk Dog, the Horse. We only have the horse as our friend today because of the bravery of Red Shadow and his quest for acceptance. He gave something beyond himself and became a great hero.

However the riddle within this story is with its beginning. Darkest cloud had addressed shadow as a daughter:

‘Daughter of Man, you know not who you are.’

Iit came to pass that Red Shadow only thought he was a boy because that is what people called him. People who didn’t know a thing about him.

‘Be strong Red Shadow,’ Chief Darkest Cloud proclaimed,’ for you are our bravest warrior and our proudest moment is to recognise you as yourself, a true Black Foot girl.’

Shadow washed away the red mud that she’d always covered her face with and smiled as she cherished the sound of her name said with love, by the people she loved around her.

◄ Bad Queen Mab a story from 'The Bond Grimoire.'