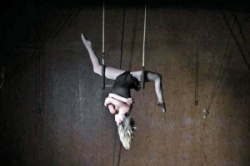 The generators thunder on

Churning up the air like a thick furrowed plough

A backbone to the field

The size of home is the thickness of this noise

And the area with which they spread their hold

young men with dreadlocks bunched up like tree stumps

Their bodies a song to the wanting of sweat

Attending to this music occasionally

With a tribe of dogs sniffing at their mud caked boots.

Id swing round and round and climb up the high notes

To the top of the rope

Then trapeze myself with twisted arm muscles

Round the back of the truck

The construction of yurts bent with willow

The ramshackle madness of their devotion to their girls

Turning and twisting down the ropes

Without hope of  audience

Just the persistence of turning

and when my arms were burning

id kick up my legs and let the rope take them

Somewhere skirted by the outside rim

Where the metal sidings of the Dodges were

Unique slack samples of a fashion in outside houses

Somewhere in there, pampered girls fed the dogs and carried babies in patchwork quilts

Round to the ‘ladies’ for gossip, tea and tarot spreads with bits of home made cake

Just the same as any other avenue

It was so forgiving.

To me, this itchy skinned girl with a muddy face and aroma of woodsmoke and pissing without shower

From these students who didn’t know how to do it

sat idling the glory of having bought the thing instead.

With a jealous audience, pretending not to look

just free with the wind

Lost on a site full of travellers from down t'road where ownership was everything and petrol cost.

Where the only name I knew was Persistence

And the reason to dance upside down

In the distance, on the edge.

A crow landed on the rail. ►

i love this. It rings of bondage and robbon dance but to me sounds like a nevada work camp. I fucking love what it made me see. I want more! time to sift through your blog!!!

Rach-when the effing eff are you gonna come on again and blow us all out of the effin WOL water?

thank you solar :) have been writing for music for a while..which never really took off...so im back to poetry basics ...thanks for your interest x

according to the sheer quality of this poem Rachel,I think I need to read up on a lot more of your work,of which no doubt,I will find is well worth the 'trip'.Please do keep them coming.

hahah you got me there...err its is funkdacious to be here chum ;)

where the eff have yer been missy? uz walkin dead have missed yer!-get back tu rocking on
.....pretty please.